This week the theme of the show was the Eighties – very nostalgic for those of us old enough to remember the era! A little scary, though, to realise the show’s host, Joe Lycett, was only born at the end of that decade!

This week the Pattern Challenge was to make an Eighties classic – a lady’s power jacket with big lapels and padded shoulders. The judges pointed out that the lapels would need to be perfectly managed and any imperfections in the sleeve insertion would be magnified by the shoulder pads. Fabric choice was also a key factor – the majority of the contestants chose a wool/synthetic blend. Patrick explained that the higher the wool content, the better the finished jacket would hold its shape. Two contestants, Nicole and Therese, chose alternative fabrics and this made it much harder to get the garment right – with the result that they finished in the bottom two places of the challenge.

Matt won – the judges felt his garment was the epitome of the Eighties power jacket, plus it was beautifully sewn and he had made a great choice of fabric.

Most of the contestants found easing the sleeves in quite tricky – there is a useful and very clear video showing two methods of doing this on THIS LINK.

We also learnt a little about the history of the shoulder pad and the power jacket. You can read more about this on THIS LINK.

Next up was the Transformation Challenge. This week the contestants were asked to transform ‘hi viz’ items into a 1980’s style outfit. The contestants produced an interesting array of garments, but Clare’s bustier top (with conical bust detail) and matching rara skirt won. The judges felt it was incredibly simple but bold, striking and very Eighties. 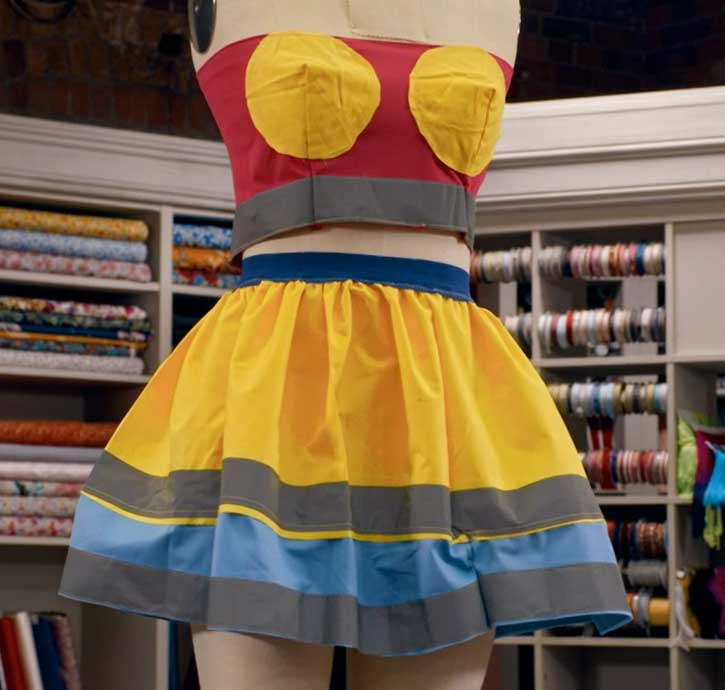 Finally we came to the Made to Measure Challenge in which contestants had to create an Eighties-style cocktail dress. The judges explained that the Eighties were a period of excess which was reflected in the decade’s fashion with exaggerated shapes, big sleeves and shiny fabrics. The silhouette was tight on the waist, big on the shoulders and often featuring a peplum. Patrick said he was looking for something really dramatic and that contestants needed to be meticulous in their sewing to get the correct fitted shape.

When the challenge was completed we were presented with a fantastic array of finished garments. Liz made a lovely one shoulder taffeta dress with a ruffled skirt and bold shoulder bow which she based on a cartoon character! Matt had drafted his own pattern for a Dynasty style dress in gold lame with frilled shoulders. Sadly he encountered several problems in fitting and sewing the dress, meaning he actually ended up removing the sleeves to make a sleveless dress!

Mark utilised an original 1980’s pattern he had found in an Oxfam shop – this featured a cinched waist and a drape detail on the skirt. Bold as ever, Nicole went for the brave choice of white and electric blue PVC to create a dramatic split and shimmer dress. Clare created a puffball cocktail dress in silver lame and pink velvet, whereas Therese made a black and gold dress with a showstopping waterfall cascading peplum that was detachable to leave a classic ‘little black dress’ beneath. 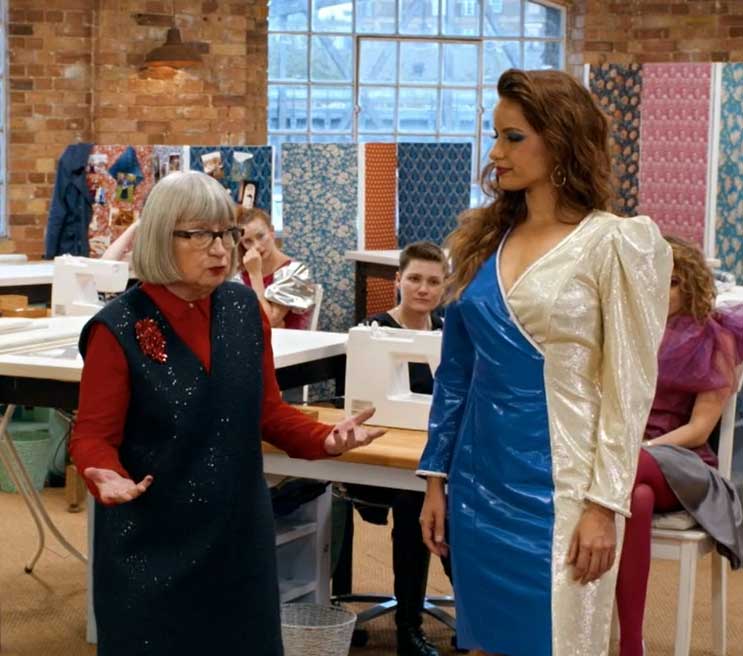 It was quite a difficult choice for the judges this week, but ‘Garment of the Week’ went to Nicole. The judges felt her dress was absolutely stunning – powerful, dramatic, sexy and right out of Dynasty! They also felt the sewing was fantastic, considering the very brave fabric choice.

Sadly, it was the turn of Therese to go home – although her Made to Measure garment was good, she had come bottom of both the Pattern and Transformation challenges this week.

We are looking forward to another exciting episode next Wednesday when we are told it will be ‘International Week’.

If watching the Sewing Bee has sparked your sewing mojo and you are wanting to start a sewing project then do check out the fantastic range of fabrics on our website.  We have new fabrics coming in regularly so do have a look at our New Arrivals section.   Here is just a selection of the latest ones: 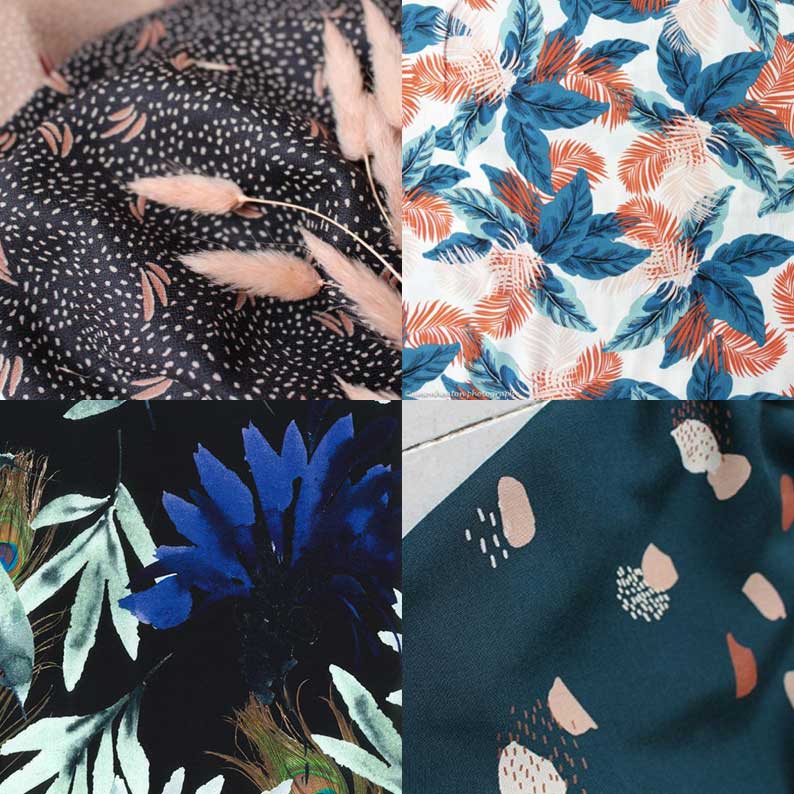 A selection of some of our lovely new fabrics

facebooktwitterlinkedinreddittumblrpinterestvkEmail
We use cookies to give you the best online experience and by clicking here or staying on our site you agree to this - enjoy ! Read our privacy policy