We hope you are enjoying the latest series of the Great British Sewing Bee and feeling inspired! This week the theme was ‘Children’s Week’ .

The contestants revealed they had a very varied range of experience with children’s clothes. Farie had made lots of clothes for her own children whereas some contestants had never sewn for children before. Small children’s garments can be tricky to sew as the pattern pieces are usually small and a lot of accuracy is required.

For the Pattern Challenge this week the contestants were asked to make a unisex romper suit. This had cross straps at the back, snap fastenings and an elasticated back. The judges explained that the choice of fabric was important. It needed to allow freedom of movement and be firm and durable. However, if the fabric used was too thick then it would be hard to get the snap fastenings on. (As some contestants found out the hard way!)

Adam chose to use three contrasting fabrics in his romper but this slowed him down considerably as he had to keep changing the thread in his machine. Andrew had chosen a fabric with a white background for his garment, but the judges pointed out this was not the most practical choice for a toddler’s outfit.

This challenge was won by Serena. Patrick loved the fabric and both judges admired her very neat and accurate sewing. Adeena came last as there was an obvious tuck on the front of the bib and her snap fastenings came off easily. 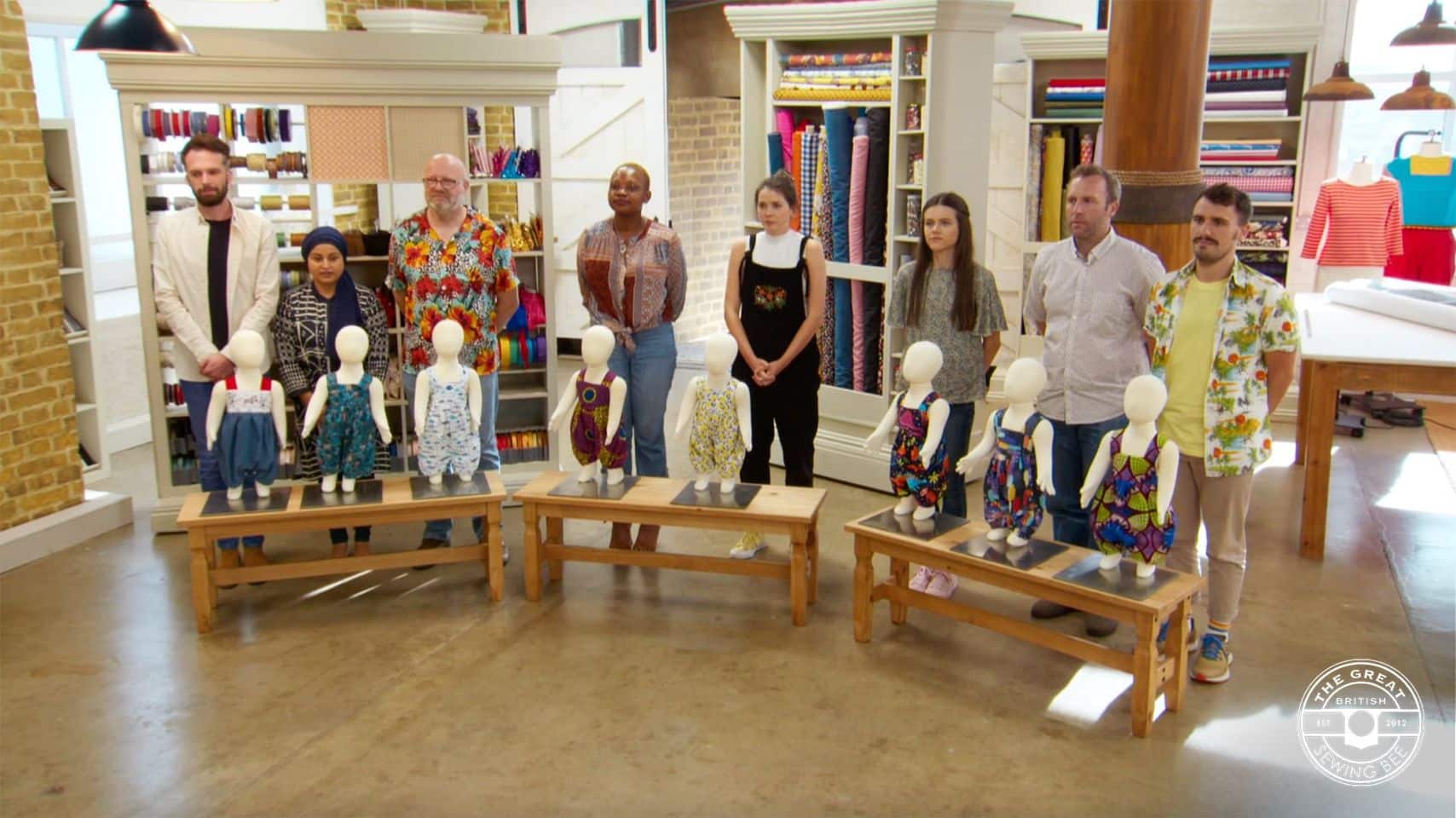 The contestants with their finished romper suits

If you would like to sew this romper suit, the Great British Sewing Bee have put the pattern on their website for you to download HERE.

When making clothes for children you may want to ensure the fabrics you choose are as safe as possible and free from toxins which may have been used in the manufacturing process.  If that is the case then look for fabrics which are OEKOTEX 100 certified.  This signifies that a material has passed tests for harmful substances in every phase of its processing and thus presents minimal health risks.  We have quite a range of OEKOTEX 100 certified fabrics, including the examples below: 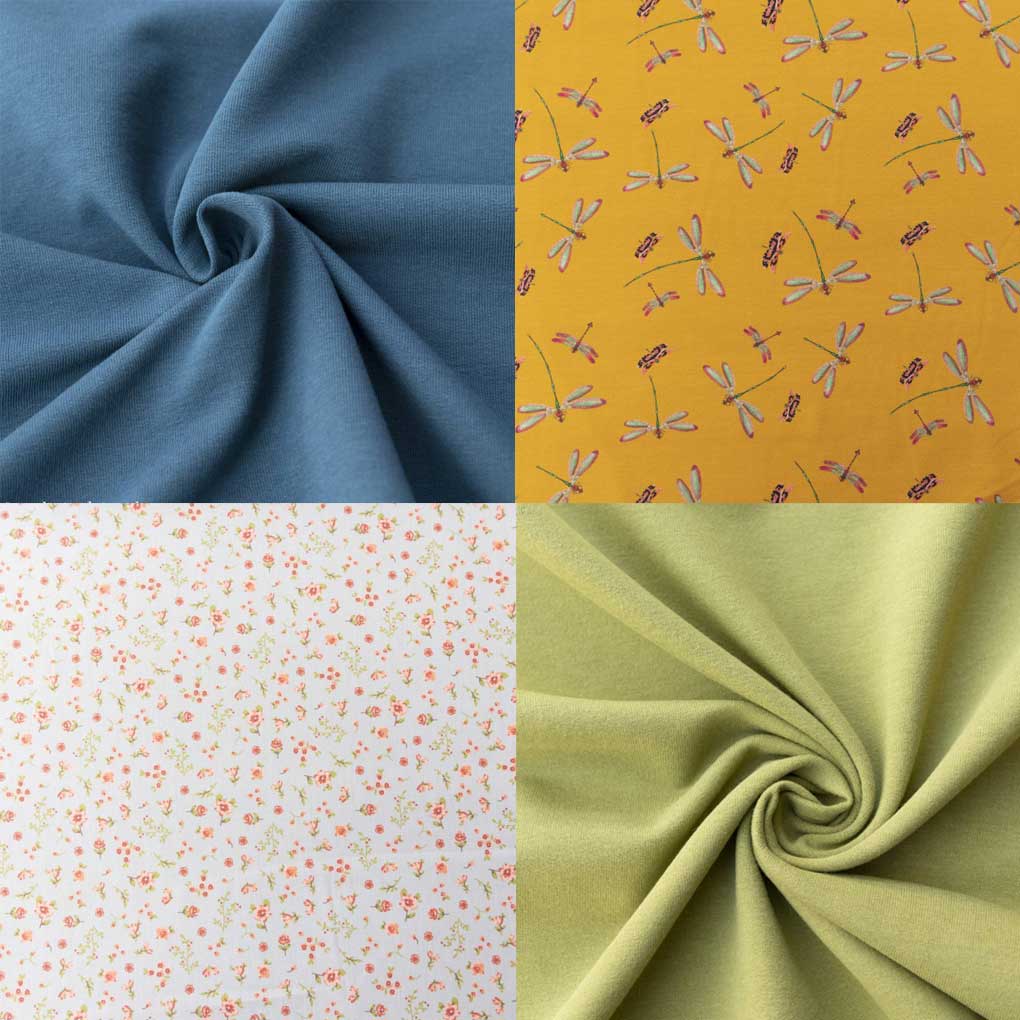 Next it was time for the Transformation Challenge. This week contestants were faced with a selection of neoprene wetsuits as well as swim floats, pool noodles and other swimming aids! They were asked to use these to create a fancy dress outfit for a child, inspired by “Under the Sea”. Contestants also had access to craft accessories, Lurex, net fabric etc. Patrick explained they were looking for a sculptural 3D effect.

Several of the contestants opted to make mermaid costumes, with varying degrees of success. Other outfits were based on a baby shark, a jellyfish, a crab and an octopus. However, the judges did have problems trying to identify what some costumers were meant to represent! They felt Farie’s baby shark and Adeena’s mermaid were not recognisable enough. They admired Serena’s jellyfish which they thought was cleverly engineered. However, it was Andrew’s crab costume that was a clear winner. It was very obviously a crab, was very three dimensional and Patrick thought it was absolutely brilliant! 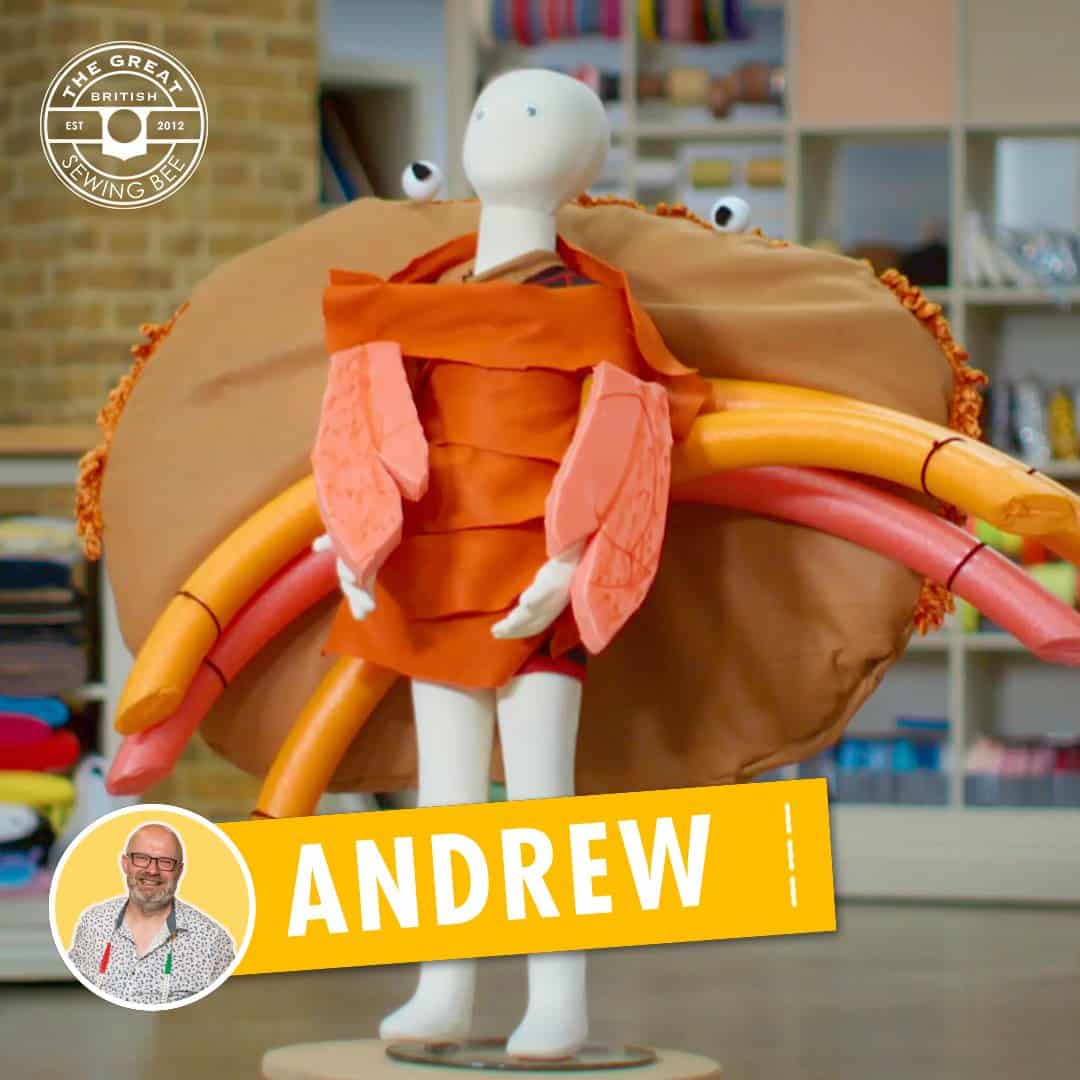 Finally we came to the Made to Measure Challenge. The contestants were asked to make a unisex raincoat for a child. Esme said she wanted them to use their imagination and do something a child would love to wear. However, it also needed to be practical and waterproof. Waterproof fabrics can be tricky to sew with a machine. Sewing everything correctly first time is important as unpicking will create holes in the fabric. The contestants had various ways to solve these problems such as using a special walking foot on the machine and a fine needle. Andrew used clips instead of pins to avoid making holes in the fabric. Another challenge was attaching the lining as it was tricky sewing two different types of fabrics together. Then the moment of truth came when they bagged it out – several contestants discovered they had made mistakes at this point, especially in the hood area.

Adeena’s raincoat featured a dinosaur fabric for the lining and also on the centre front and pockets. However, her toggle fastenings didn’t work properly because the loops were the wrong size. Damien was rather adventurous in using a shower curtain to make his raincoat. He created an aquarium effect coat with a lining of purple taffeta and it was fastened with magnetic strips. Patrick thought it worked really well and liked the use of magnets. However, the judges did notice that he had caught the lining at one point.  Rebeca opted for rain cloud fabric with contrasting red sleeves and pockets. However, she had to redo her hood and the judges noticed that it didn’t meet where it should, plus her snaps were not aligned correctly.

Adam chose yellow PUL fabric which is not the easiest to work with. It featured a boat print and it was meant to have boat pockets. However, he ran out of time and couldn’t get the pockets done. Esme said it was not well made and also it was too small. Patrick remarked that his fastenings were a bit of a “horror show”! Even Adam conceded it was the worst thing he had ever made in his life!

Serena’s raincoat incorporated a novelty fabric on the sleeves and pocket flaps. The judges felt it was incredibly neatly sewn but the lining was too short.  Raph opted to create a classic French rain coat with Guatemalan inspired colours, which Esme loved. Andrew made a reversible coat with contrast cuffs, pockets and snaps. Esme loved the choice of colour and thought it was very neat. 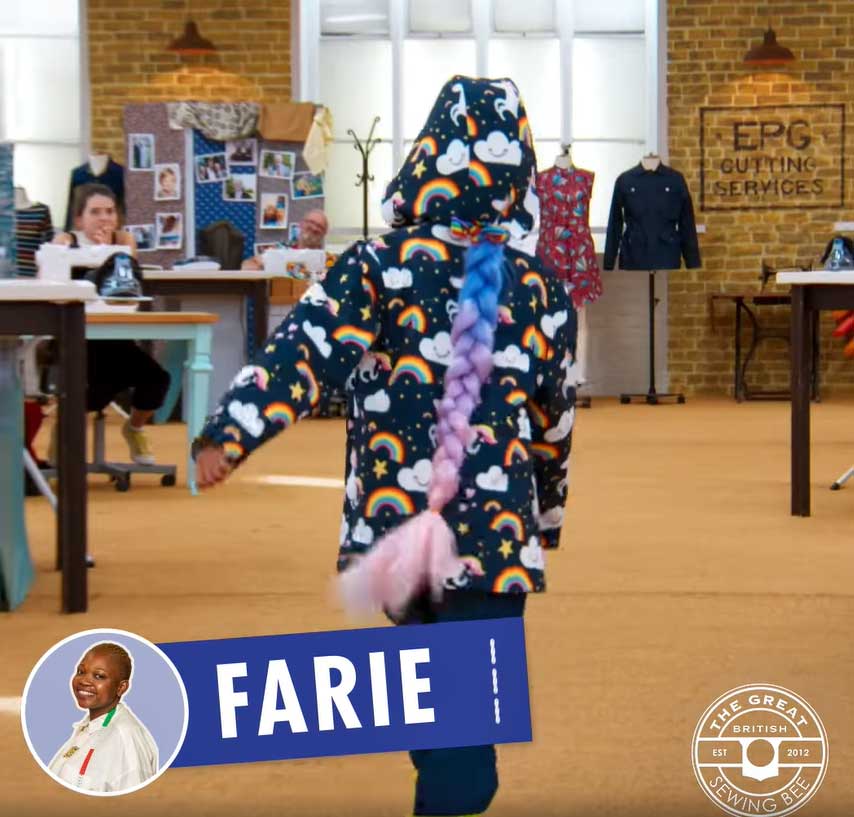 Farie’s children love unicorns and rainbows so she chose a fabric incorporating these on a navy background. Her design also incorporated a unicorn mane at the back! Esme liked the print, the way Farie had pattern matched the pockets and loved the mane. Patrick thought it was very jolly and beautifully sewn as well. So once again Farie clinched the award for “Garment of the Week” – the third time in a row!

Sadly it was Adam who was chosen to leave the sewing room. Patrick said that he thought Adam could have gone all the way to the final, but was unlucky to have had a such a bad day.

So the competition is now really hotting up with not a lot to chose between the remaining competitors. We are looking forward to the next episode when the theme will be “Reduce, Reuse and Recycle”.