So the competition is hotting up now – we are down to nine contestants! This week was “International Week” with patterns, garments and fabrics from around the world!

As always the programme started with the Pattern Challenge. This week the contestants were asked to sew a striped Breton top. This had three quarter sleeves, buttoned plackets on the shoulders and a boat neck. The traditional Breton top is white with thin blue stripes and has been part of the official uniform of the French Navy since 1858. The top was later made fashionable by Coco Chanel in the early 20th century. For this slightly more modern version, the contestants were supplied with a variety of striped stretch cotton jersey in assorted colours.

Patrick and Esme outlined some of the problems that they thought could catch the contestants out. They would need to follow the instructions very carefully to ensure the button shoulder plackets were correct. In addition, the plackets’ pattern pieces were small, fiddly and difficult to sew. The neck was to be bound with non-stretch binding. If the contestants stretched the jersey even a fraction whilst sewing the neckline it would end up distorted. Finally, it was important that the distinctive stripes were pattern matched at the side seams.

Farie, true to form, struggled with time in this phase and didn’t finish, with her buttons not being sewn on. She was last as a result. The judges placed Serena’s top first and commented that they were impressed with her neat sewing.

The final line up of Breton tops

If you would like to sew a Breton top then we would suggest one of the following patterns: 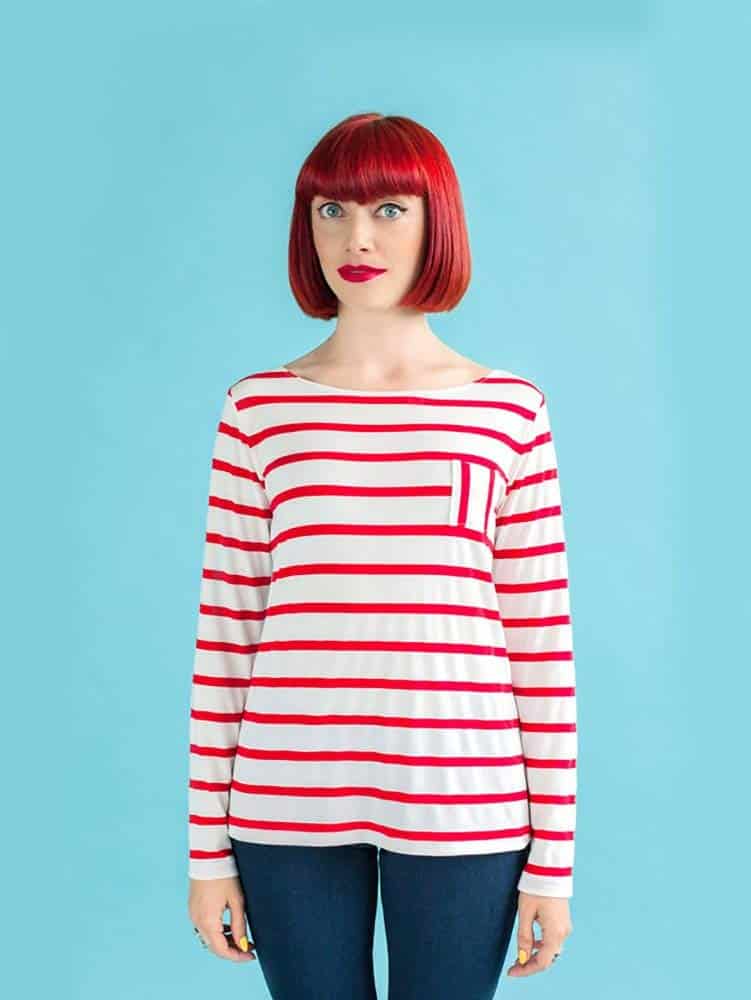 Tilly and the Buttons – Coco Dress and Top Sewing Pattern 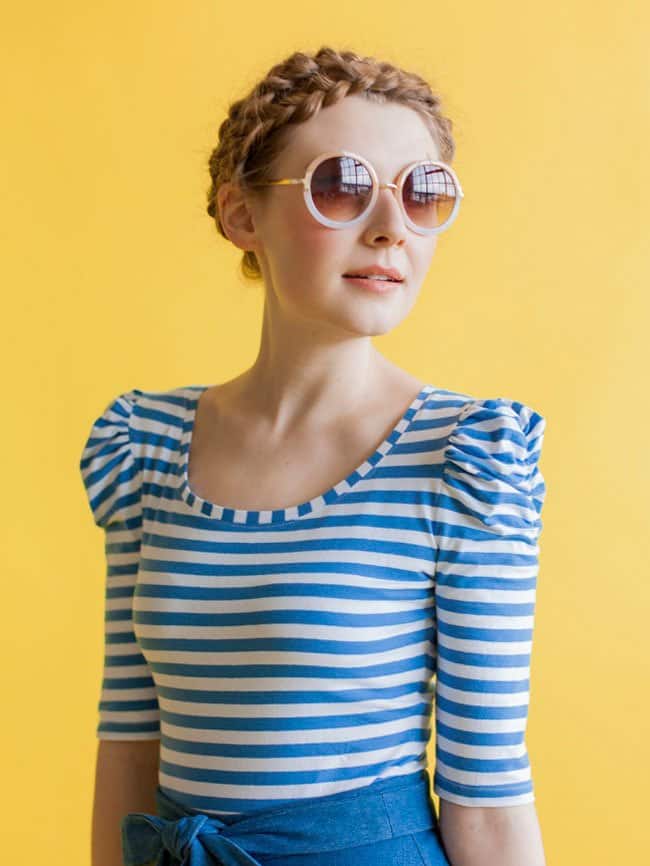 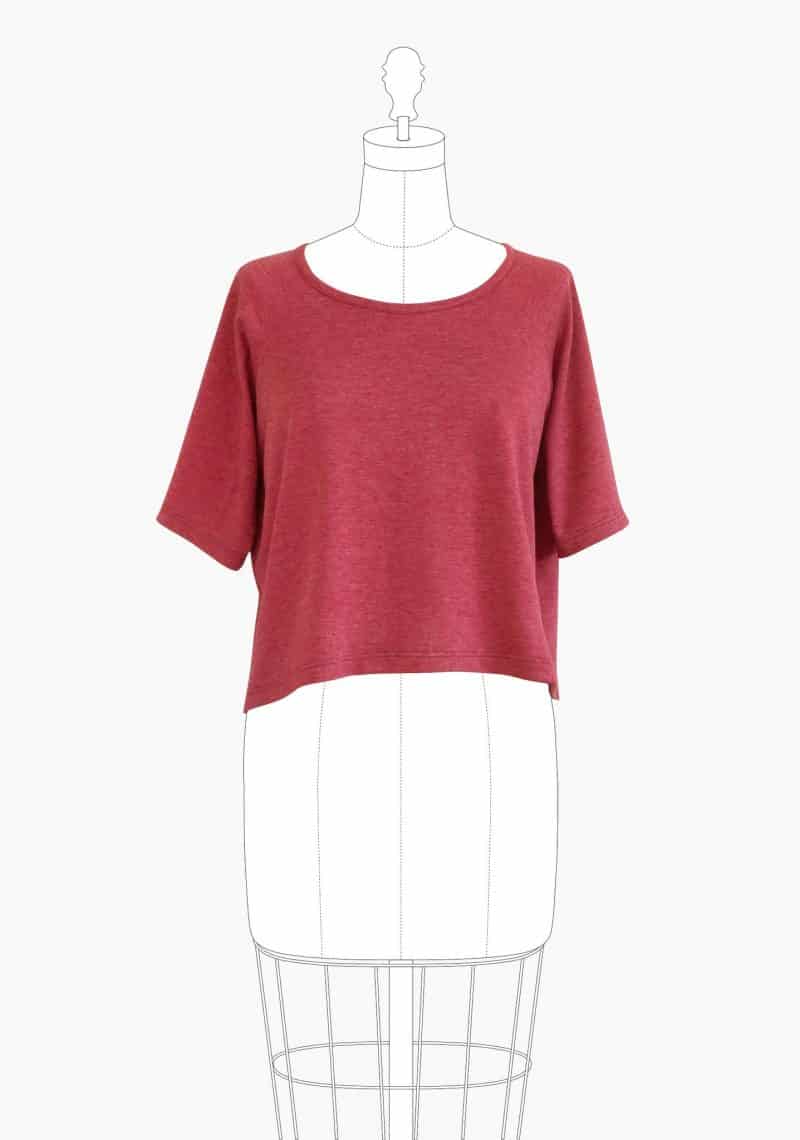 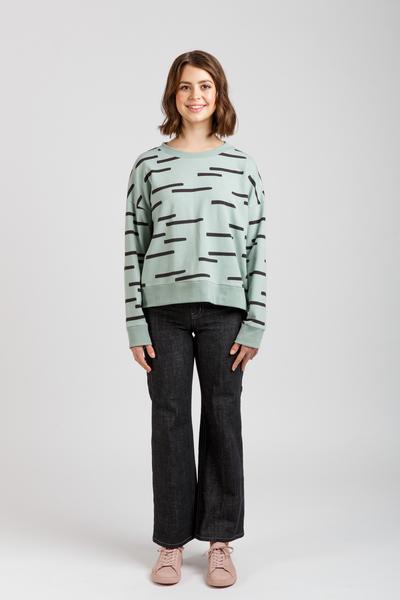 For fabric we have these lovely striped cotton jerseys:

We then travelled from Europe over to South East Asia for the Transformation Challenge! The contestants were faced with a selection of sarongs from which they were asked to fashion a garment for any age and any gender. Esme and Patrick wanted to see the contestants really use their imagination, but the finished item should be totally different to a sarong. The sarongs were of varied patterns and had lots of trim. Esme said that the trim should actually add something to the garment rather than being tacked on as an afterthought.

When the time was up, the contestants had produced a variety of different garments including a shirt, a child’s dress, a playsuit, a top and skirt and a kaftan. A couple of the final garments too closely resembled the original sarong in the judges’ opinion. Having come top in the Pattern Challenge, Serena plunged to last place in this phase – she had fixed the sleeves in totally the wrong place and the garment was not wearable.

Rebecca came second with a lovely top and skirt in animal print. Esme loved the trimming on it and remarked the whole garment was well thought out. But it was Adam who clinched the win this time with his pink one shoulder dress. Esme was particularly impressed with his popper fastening and Patrick praised the way the pompom trim had been incorporated. 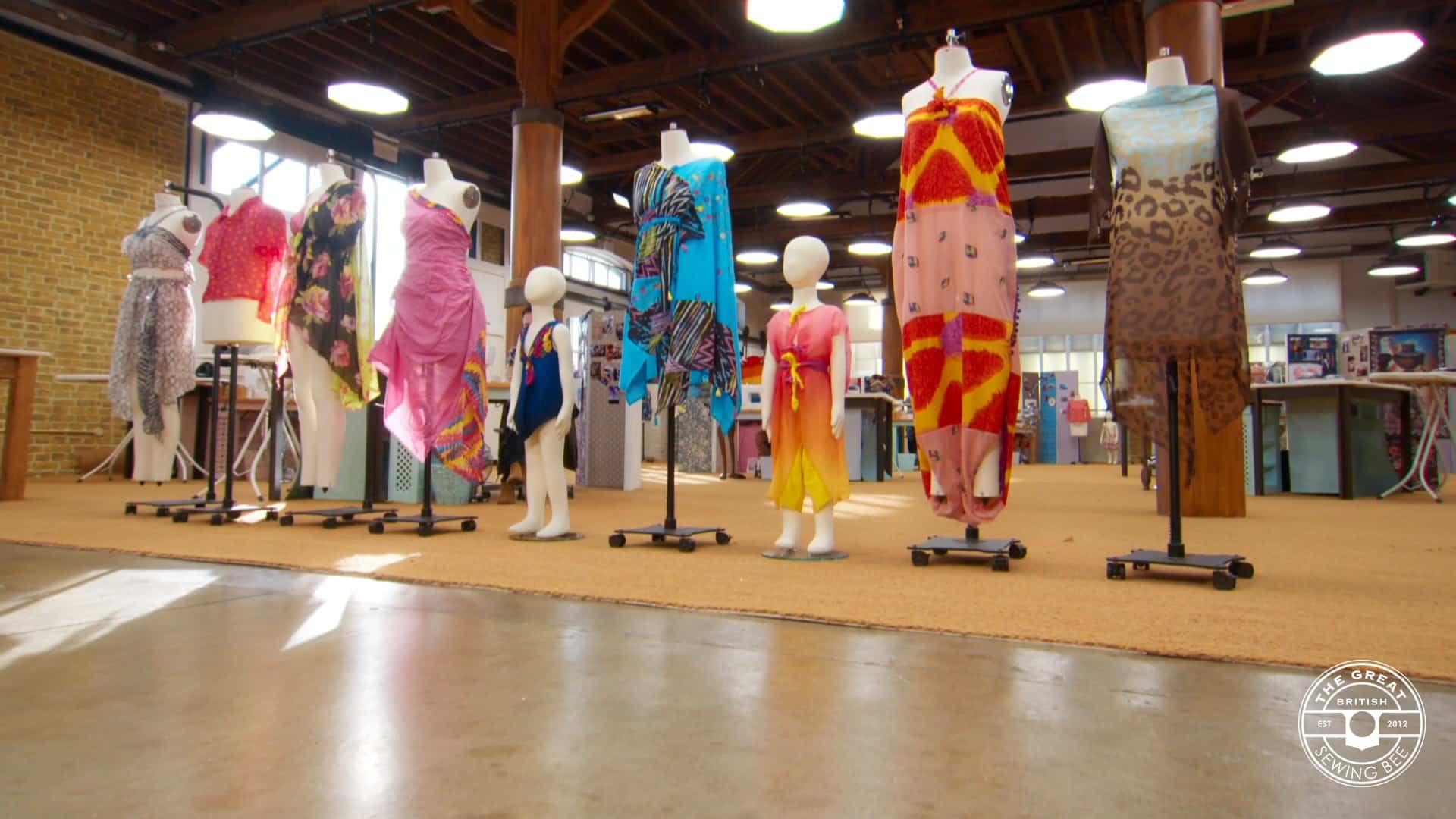 If you are looking for fabric that gives the look and feel of a sarong, then do browse our wide range of Woven Viscose: 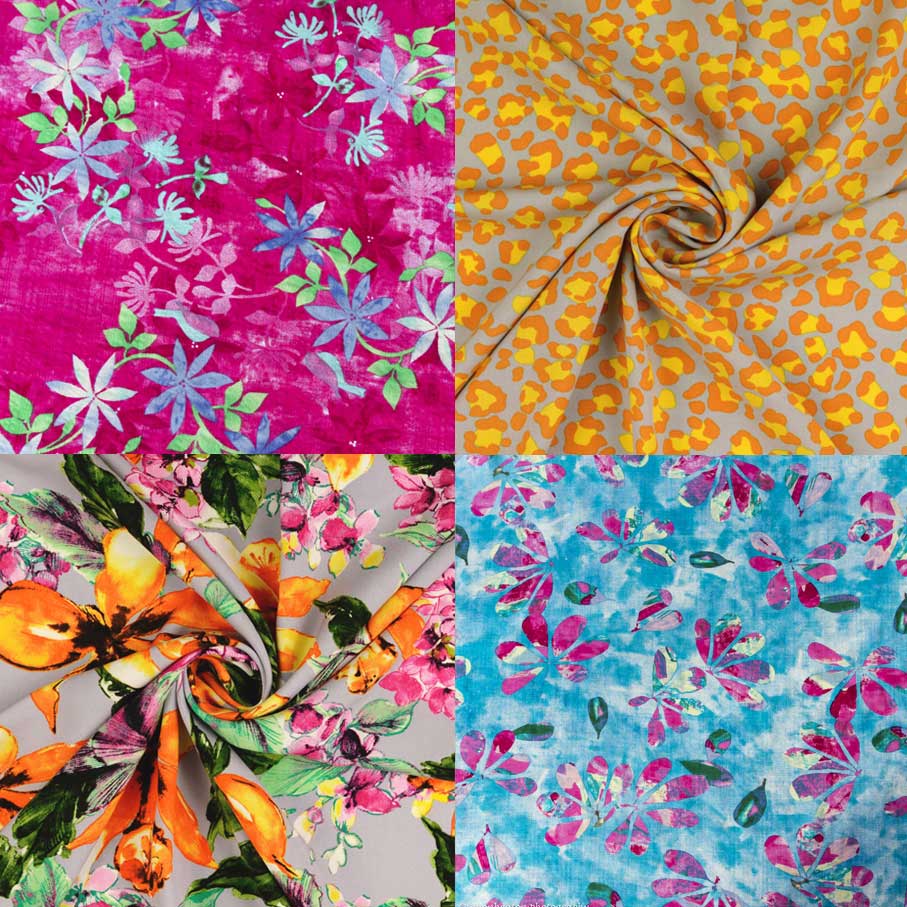 Finally it was time for the Made to Measure Challenge. This week contestants were asked to make a woman’s outfit inspired by the Mexican national hero and feminist icon, Frida Kahlo. Kahlo was born in Mexico and is arguably Latin America’s most inspirational artist and there is lots of pattern and colour in her paintings. You can learn more about Kahlo’s life and works HERE.  The judges explained that they wanted the contestants to interpret the theme in a modern and exciting way. Esme commented that she hoped to see the inclusion of lots of pattern, embroidered fabric and vivid colours that were the signature of Kahlo’s style. .

This brief gave the contestants lots of scope to create something individual and exciting. Damien created a long dress with a boned bodice in a mix of bright colours. The bodice was topped with a black lace frill which was inspired by Kahlo’s distinctive eyebrows! The judges thought the fit was good, but Esme didn’t like the combination of fabric and colours. Both judges thought it didn’t really say ‘Kahlo’ enough.

Rebecca went for a hot pink satin outfit with a billowing three layer skirt. Esme liked the fabric and the overall design but spotted a raw edge on the zip.  Andrew opted to incorporate the style of the Mexican huipil in the top of his dress, using machine embroidery and satin stiches. However the judges thought it was poorly executed with an untidy raw neckline.

Adeena self drafted a pattern for a long dress with a full skirt and a fitted bodice, similar to an Indian Lehenga. The judges thought it was very dramatic with a lovely shape and loved the way Adeena had linked Kahlo to her own culture and story. Unfortunately, though, the garment was not finished with the skirt not hemmed and the waistband merely pinned.

Cathryn told us that Kahlo had allegedly had a secret affair with the Russian revolutionary, Trotsky. This inspired her to use Russian doll fabric for the base of her shift dress, which was overlaid with lace. Patrick liked the overall impact but the judges felt you could not fully appreciate either the printed fabric or the embroidered lace. They were, however, impressed with her French seams but noticed that the band on the arms was to cover up a mistake.

Raph went for a top and culottes combination. The top was turquoise with an inserted yellow square and shoulder pleats which were mirrored on the culottes. He also incorporated patterned applique on the sleeves. Patrick and Esme felt it was fantastically eye-catching and noted the fit on the trousers was good.

Adam produced a white drill playsuit which incorporated details in patterned embroidered fabric. Esme liked the buttons and the contrast of white with the embroidered fabric. However, the judges noted that the top was too long whilst the back crutch was too short, so creating the dreaded ‘hungry bum’ effect!  Serena created a pair of floral palazzo pants with a simple top that was smart but feminine. The judges praised her very neat sewing and thought her fabric choice was good and the fit of trousers was perfect. However, they felt that the top didn’t quite feel connected in style to the pants.

Farie decided to self draft her pattern which was based on Kahlo’s famous painting “The Broken Column”. It featured a contrast panel down the front in hand-frayed jacquard fabric which echoed the spinal column in the painting. This was matched with an oversized bow at the back. Both judges felt it was an absolute knock out, with a clever, clear idea and it was beautifully made. Esme predictably liked the large bow which she felt had a 3D effect. This dress deservedly won “Garment of the Week” and saved Farie after her problems in the Pattern Challenge.

Sadly it was Cathryn who was chosen to go home this time.

So now we are down to eight contestants for the next episode for which the theme is “Children’s Week” – we can’t wait!