Environmental issues are a hot topic at the moment, so for this episode the theme was “Reduce Reuse Recycle”. Patrick shocked us all when he revealed that in the UK we throw away a million tons of clothing every year!  One contestant, maths teacher Andrew, really got into the spirit of things by wearing a multicoloured tank top made out of old socks!

For this episode, in the interest of sustainability, all the fabric in the haberdashery was replaced with second hand garments.

As always it was the Pattern Challenge first. The contestants were asked to make a man’s waistcoat. The pattern consisted of fourteen different pieces and five buttons and buttonholes which needed to be lined up properly. The judges pointed out that a successful waistcoat requires heavy fabric for the front and lighter fabric for the back and lining. The contestants produced a fantastic array of waistcoats. Raph’s was particularly eye-catching with a striking striped fabric. Patrick and Esme both thought it was very neatly sewn, so not surprisingly he won this challenge. Adeena had made some mistakes in the cutting out and ended up using fabric that incorporated pocket flaps. This was, therefore, difficult to sew and created lumps and bumps in the waistcoat, meaning that she came last.

The contestants and their waistcoats

For the Transformation Challenge the contestants were greeted with a selection of military surplus items. Their mission was to use up to three of these to make a stylish item for a woman, with as little waste as possible. Patrick and Esme said they wanted to see garments that were very chic. They were allowed to use any trim they like, but the judges explained they did not want it to detract from the actual fabric.

Farie won this challenge with a dramatic cape which the judges thought was very imaginative. Esme even tried it on and gave it a twirl – Patrick thought she looked terrific in it.

Raph produced an off the shoulder asymmetric dress with a huge sleeve, with a contrasting orange binding, which the judges approved of. They weren’t keen on the trim of Rebecca’s dress and thought Andrew’s poncho style dress was “rather potty”! They liked the way Damien had created cross straps on the back of his dress, but not the raw edge of his asymmetric hemline. Serena’s halter-neck was rather stylish and had a camouflage net skirt, but Esme thought it was “too obvious! Adeena came last again – the judges didn’t like the sewn down fringing on her tabard. 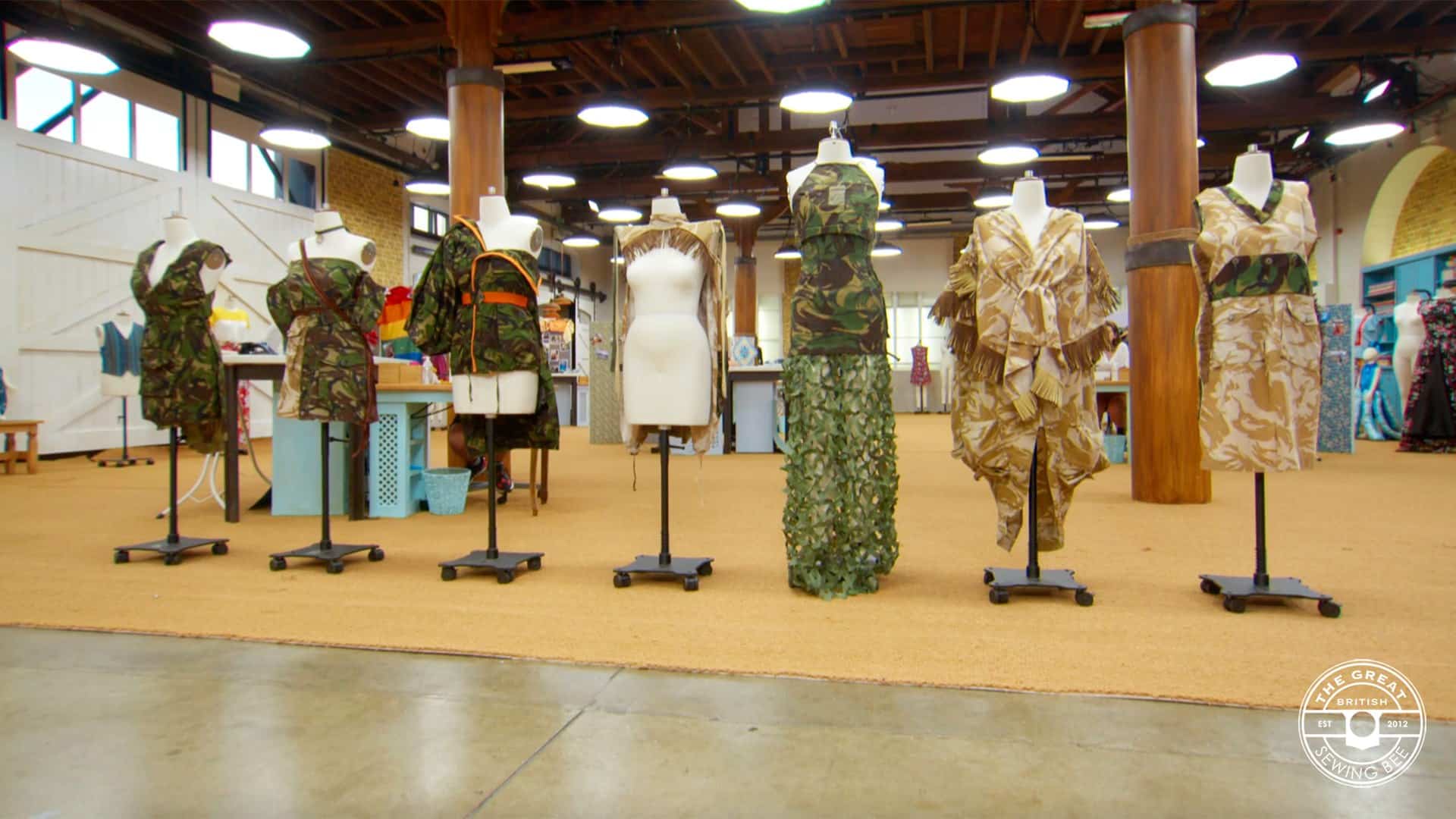 The climax of this episode was the Made to Measure Challenge. The contestants were asked to source some worn out jeans and turn them into a woman’s dress. Esme explained that they would have to patchwork the fabric together as the pieces in the jeans were not large enough.

We heard about the fascinating trend for “denim mining” in the US which involves searching for vintage jeans in abandoned mines. You can learn more about this HERE.

And more information about the history of denim and denim jeans HERE.

Damien chose to incorporate fabric from jeans with paint and oil spatters on them in his dress. Esme loved the spattered effect and also the contrast gold stitching which was very neat. However, the dress was too big at the back of the neck, the zip was not well put in and the judges were not sure about the pockets.

Andrew made a spiral style dress with a herringbone waist and it was decorated with rivets. Patrick liked overall design and the rivets whilst Esme liked the diagonal zip. However it was noted that the dress was too big at the back.  Rebecca also incorporated a herringbone pattern, this time in the front panel, which contrasted with the other vertically striped panels. This was based on a patchwork bag design sewn by both Rebecca’s mother and grandmother. Esme loved the front panel design but noticed some problems with the fit of the dress.

Serena created an A line dress – she went for a colour blocked design with sixteen panels. Esme and Patrick really liked it and felt it was sewn very precisely and liked the way a bit of the original waistband formed the end of the sleeve. Adeena also opted for an A line dress and incorporated five different colours of denim. She hand painted a paisley motif to go on the back of the dress. Patrick liked the combination of colours and the painted denim. However, it was noticed she hadn’t hidden top of the zip, and the dress was too tight on the bottom.

Farie used old black and white jeans to make a fitted sleeve-less monochrome dress with a full length open-ended zip. Esme loved the graphic effect and the side zip but spotted a little bit of excess fabric over the hips.

Raph was very ambitious as his dress incorporated more pattern pieces than anyone else. It was halter-neck in style with wavy panels in six shades of blue plus a patchwork whale. Patrick loved the raw edges on the panels, saying it looked like sea froth. He also thought it was absolutely stunning and looked fit for the catwalk. So we were not surprised when it won “Garment of the Week”!

If you would like to make a multi-panelled dress, then why not try this pattern from Megan Nielsen:

And if you don’t happen to have a selection of worn-out jeans to hand, why not browse our denim collection: 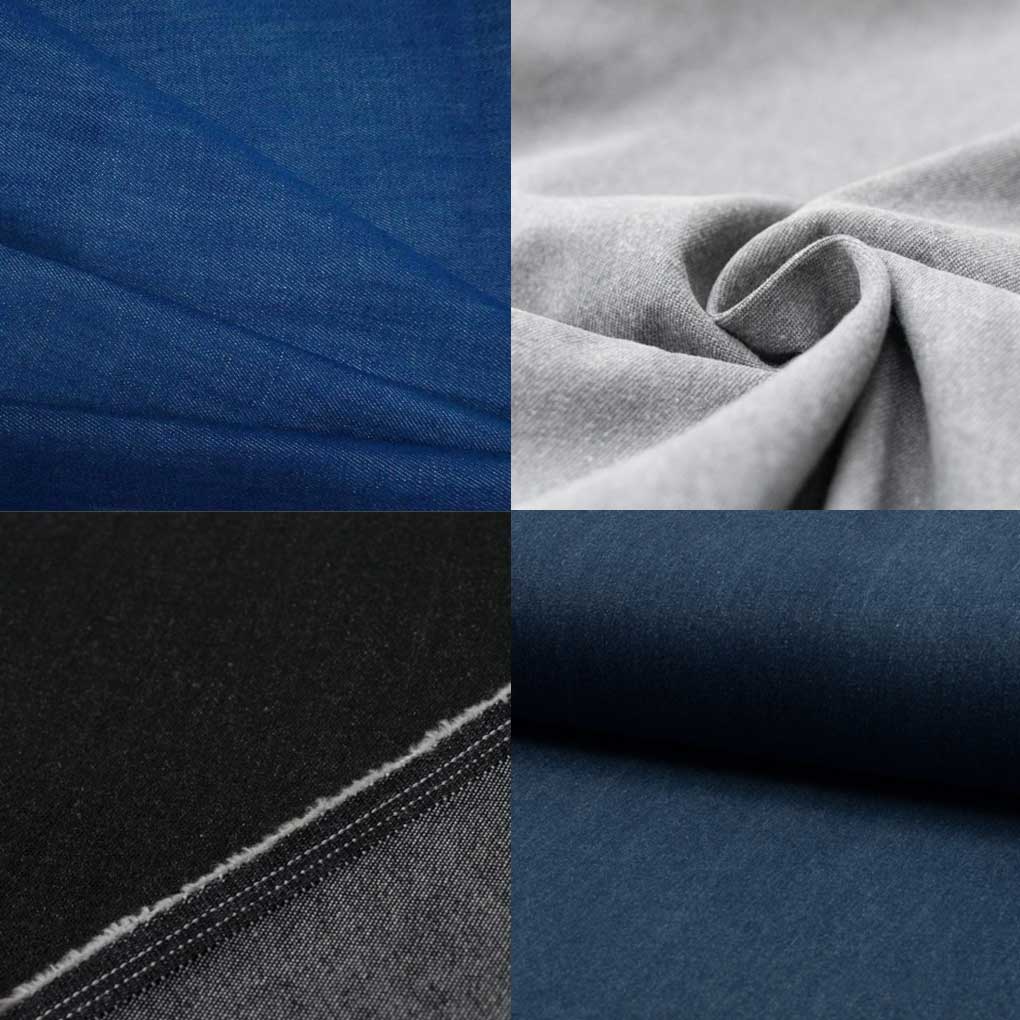 Sadly Adeena had had a very bad week, having come last in both the Pattern Challenge and the Transformation, so she was the one chosen to go home.

We are excited for next week already and we are told that the theme will be “Winter Week”!

Here at Dragonfly Fabrics we don’t like fabric to be wasted, and we also like to save you money, so we have lots of bargains in our remnants section, including these fabulous 1kg Mixed Fabric Bundles: