This week we only have five contestants left and it is the Quarter Final, with the theme being “Music of the Movies”.

For the Pattern Challenge, contestants were asked to make a dance dress inspired by the film ‘Dirty Dancing’. The pattern featured a lined bodice, which needed to be bagged out, plus a circle skirt with applique lace on the waistband and a lapped zip. This week contestants were restricted in their choice of fabric. They had to use satin for the main dress and chiffon for the overlay. The judges said they thought this was one of the most technically testing Pattern Challenges they had ever had on the Great British Sewing Bee. The pattern had twenty eight pieces in total. In addition, both satin and chiffon are difficult to sew and will show any imperfections.

Both Farie and Damien struggled for time in this phase. Neither garment was hemmed, and Damien as usual went “a bit rogue” and didn’t follow the instruction for the zip, so he came fifth. Farie was fourth – Esme loved the colour she had chosen but there was a mistake at the bottom of the zip that Farie had tried to cover with a lace waist tie. Raph’s overlocker de-threaded itself two-thirds of the way round the hem, so he didn’t manage to get the lace waistband put on. He came third.

The judges thought Rebecca’s dress was very impressive and said the bodice was beautifully constructed. But they spotted it didn’t quite match up on the shoulder, there was a little tuck at the bottom of the zip and she had not levelled the hem. She, once again, came second to Serena. Patrick thought Serena’s dress was exceptionally well sewn and she was the only contestant to level the hem, so unsurprisingly she won this challenge.

Several of the contestants struggled with the lapped zip – there is a tutorial about how to do them HERE.

Next up was the Transformation Challenge where the contestants were faced with a selection of old curtains. Patrick explained that this challenge was inspired by Maria in the Sound of Music making the Von Trapp children garments out of curtains. The contestants were asked to make a garment for a child which included either shorts or trousers. Esme explained she wanted to see the contestants use the patterns on the curtains in new and exciting ways.

Once again, Farie ran out of time to finish this challenge, although the judges liked what she had managed to complete. She was fifth. Both Raph and Damien chose to make lederhosen style outfits. Patrick liked Damien’s and thought the fit was terrific. Unfortunately, though, one of the poppers came off when Esme tested them, so he was fourth. Esme loved how Raph had used the gathered bit of the curtain as a waistband and thought the fringe on the bottom of the trouser leg really worked. He came third.

Rebecca made a ‘skort’ style outfit with shorts underneath a dress. Patrick liked the use of the cream lining fabric against the bold pattern. But it still wasn’t enough for her to beat Serena and she was second again! The judges felt Serena’s culotte-style outfit had a Japanese feel and they loved the applique on the front so she won this challenge, yet again! 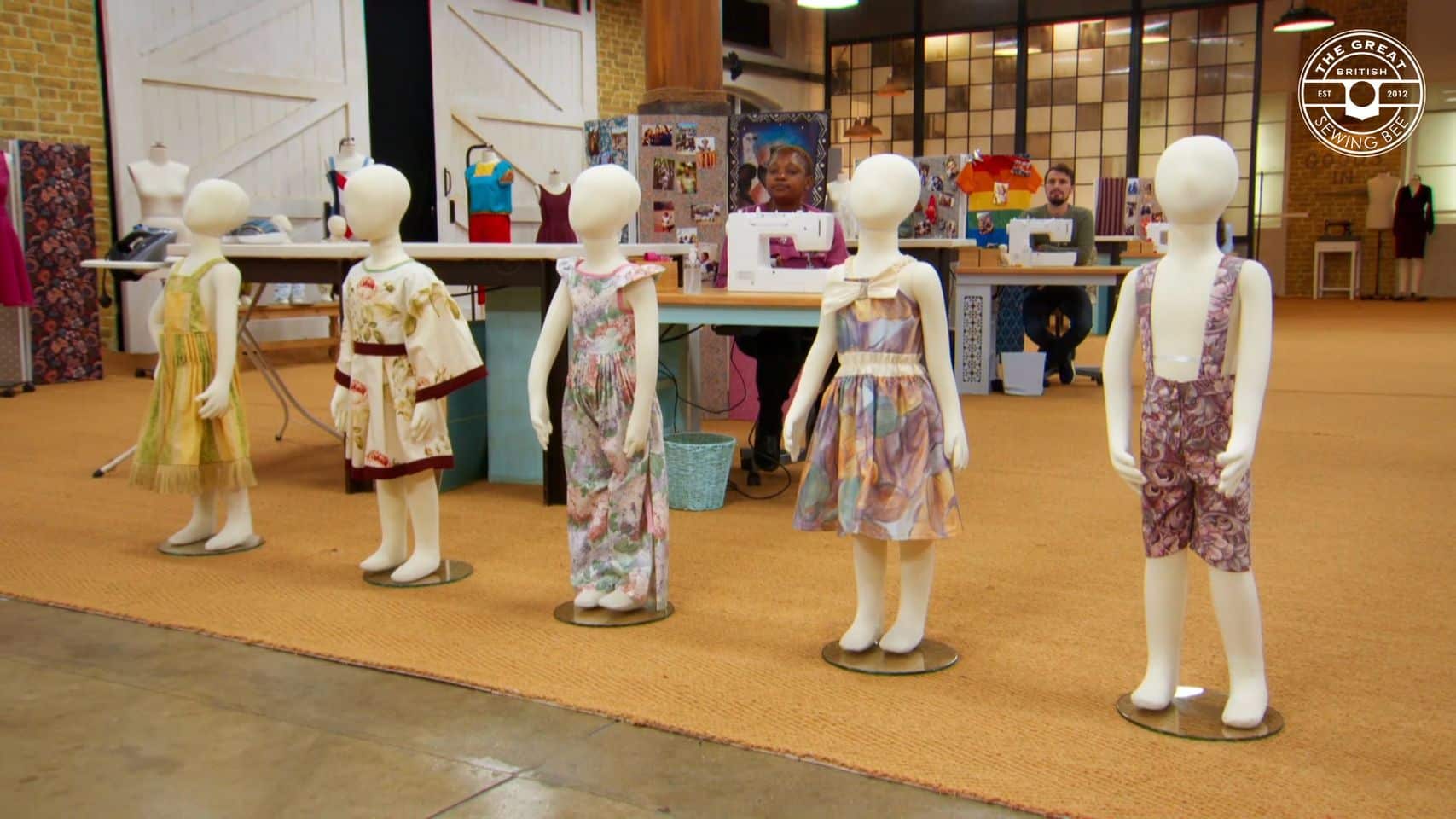 Finally it was on to the Made to Measure Challenge for which the theme was the film ‘Dreamgirls’. ‘Dreamgirls’ was inspired by Motown, and particularly by The Supremes. With this in mind the contestants were asked to make an outfit suitable for a disco diva. Esme said that she was expecting to see sexy outfits with a really good fit. We heard a little about one of the top fashion designers of the era, Stephen Burrows. His clothes were an integral part of the New York disco-dancing scene of the 1970s. You can learn more about him HERE.

The contestants produced a stunning variety of outfits in this challenge:

Farie’s red dress had a thigh high slit, an asymmetric bodice and  one lace feature sleeve. Patrick thought it really had star appeal. Esme loved the sexy thigh high split but spotted some rippling down the seams.  Serena created a fully sequinned two-tone dress with contrasting panels of silver and red with a modest thigh slit. Esme loved the fabrics together and Patrick thought it was spectacular.

Raph made a gold jumpsuit with a black cape, trimmed with feathers embellished with gold. The judges thought it was dramatic and incredibly original.  Damien used gold and bronze metallic fabric and orange upholstery fabric in his dress. He interfaced the fabric but had problems with it bubbling. The judges felt that whilst it had a lot of impact it didn’t really say ‘Dreamgirls’. They thought he hadn’t “nailed the brief” and had made a bad choice of fabrics.

Rebecca went all out with a gold satin dress with a sequinned bodice and an organza fishtail. Patrick’s first comment was “Wow!”. He then went on to say he could really see one of the ‘Dreamgirls’ in the dress. The judges loved it so much that they made it “Garment of the Week’. This was a first for Rebecca who was overjoyed to have beaten Serena for once! 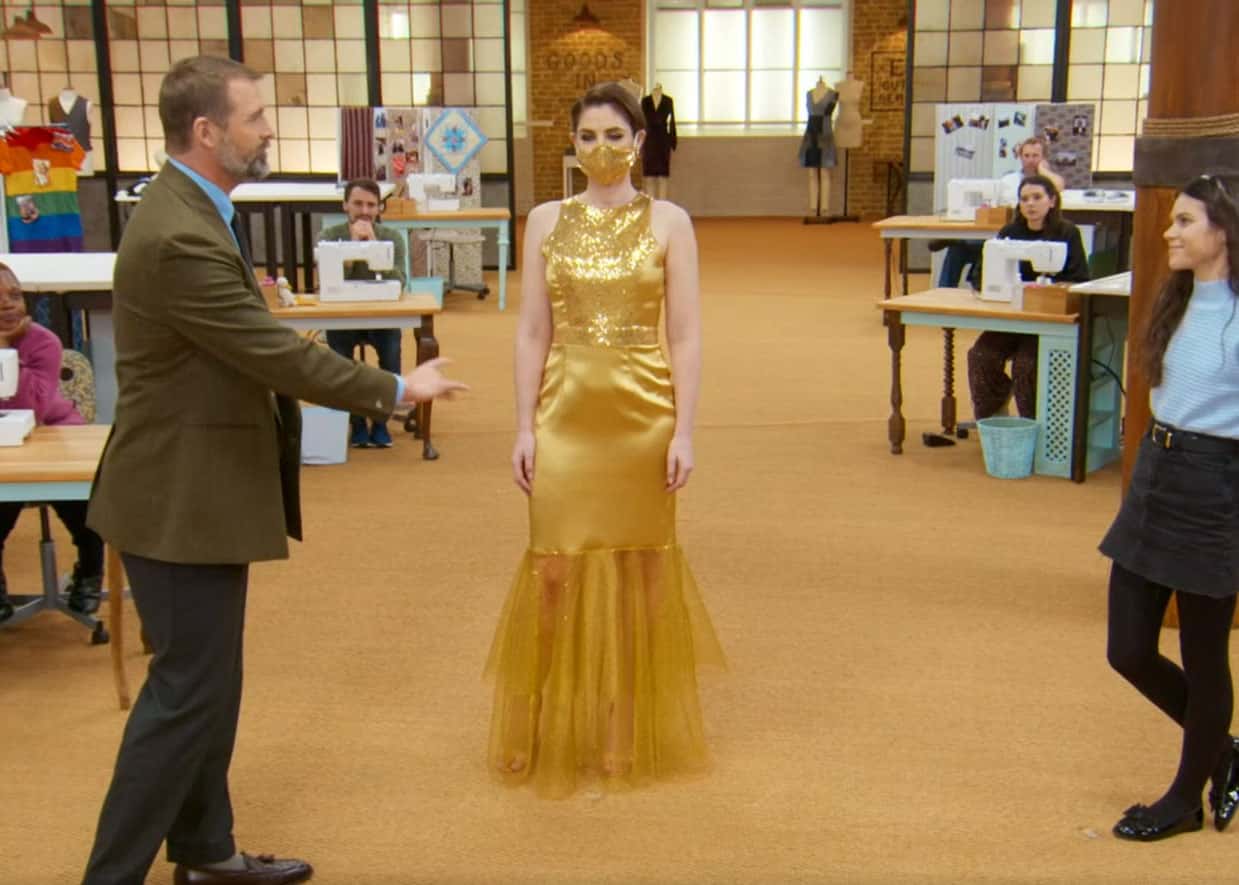 Not surprisingly, it was Damien who was chosen to go home this week. I’m sure we will all miss his entertaining ways and sense of humour!