We can’t believe we are at the Semi Final already, with only Farie, Rebecca, Raph and Serena left in the competition! This week the theme was ‘The 1940s’.

For the Pattern Challenge the contestants were asked to make ‘Oxford Bags’. These are baggy trousers that originated in the 1920s and became popular for dancing in the ‘Swing Era’ in the 1940s due to the freedom of movement they gave.  ‘Oxford Bags’ also had a revival in the 1960s with Northern Soul fans. If you would like to learn more about the history of ‘Oxford Bags’, there is an interesting article HERE.

The pattern given to the contestants featured a zip fly, a waistband with hook and bar, pleats in the front, in-seam pockets and turn-ups. The contestants were told they needed two fabrics, one for the trousers themselves and one for the pocket linings.

Farie, true to form, did not quite finish, as she did not get her hook and bar on. She came fourth.  Rebecca came third – she forgot to incorporate her fly guard at the right stage, so it had to be added later. This meant the judges could see two lines of stitching rather than one. Patrick also noticed the waistband was not perfectly square at the front. However, the judges felt it was a pretty good job despite some small imperfections.

Serena came second – the judges thought her trousers were absolutely first class apart from the fact that the waistband was a bit lumpy where it had been over-pressed.  Raph was the winner of this phase. Patrick said the trousers were so good he would wear them himself and Esme also was very impressed. 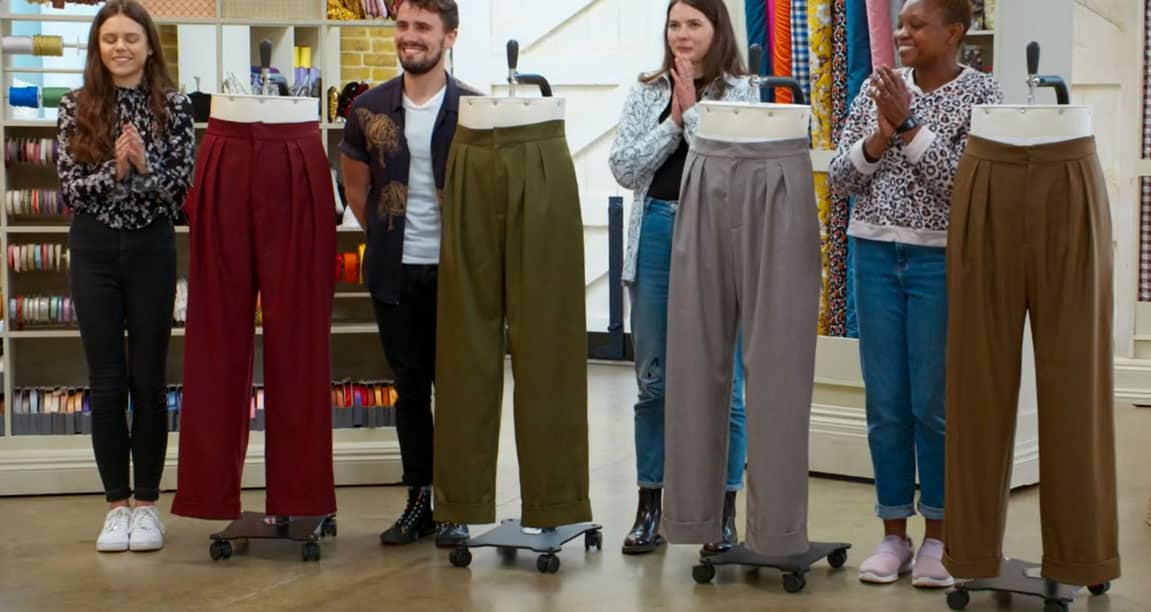 Next we came to the Transformation Challenge. Due to the Second World War, the 1940s were an era where people had to make the best of what they had. This meant that many military fabrics were repurposed and sewn into a range of garments, from underwear to wedding dresses.  There is an interesting article about ‘parachute wedding dresses’ HERE. To this end the contestants were supplied with a selection of parachutes and asked to make a garment for a man or woman. The judges explained they wanted them to use as much fabric as they could and create something with volume.

Rebecca made a full length gown in earthy tones. Esme was not too keen on the colours but liked the use of the parachute cords laced along the back. She came fourth.  Farie made an evening dress in shades of pink and purple and again laced it with the original cords at the back. However Patrick didn’t like the combination of colours and she came third.

Raph opted to create a wedding dress with a spectacular train. Esme thought the overall effect was dramatic, although she did feel the bosom area was rather mumsy. He came second.  Serena was the winner of this challenge. Her dress was created from a series of turquoise ruffles. Esme loved it and thought it was quite modern, wearable and had impact. Patrick thought it was phenomenal and elegant. 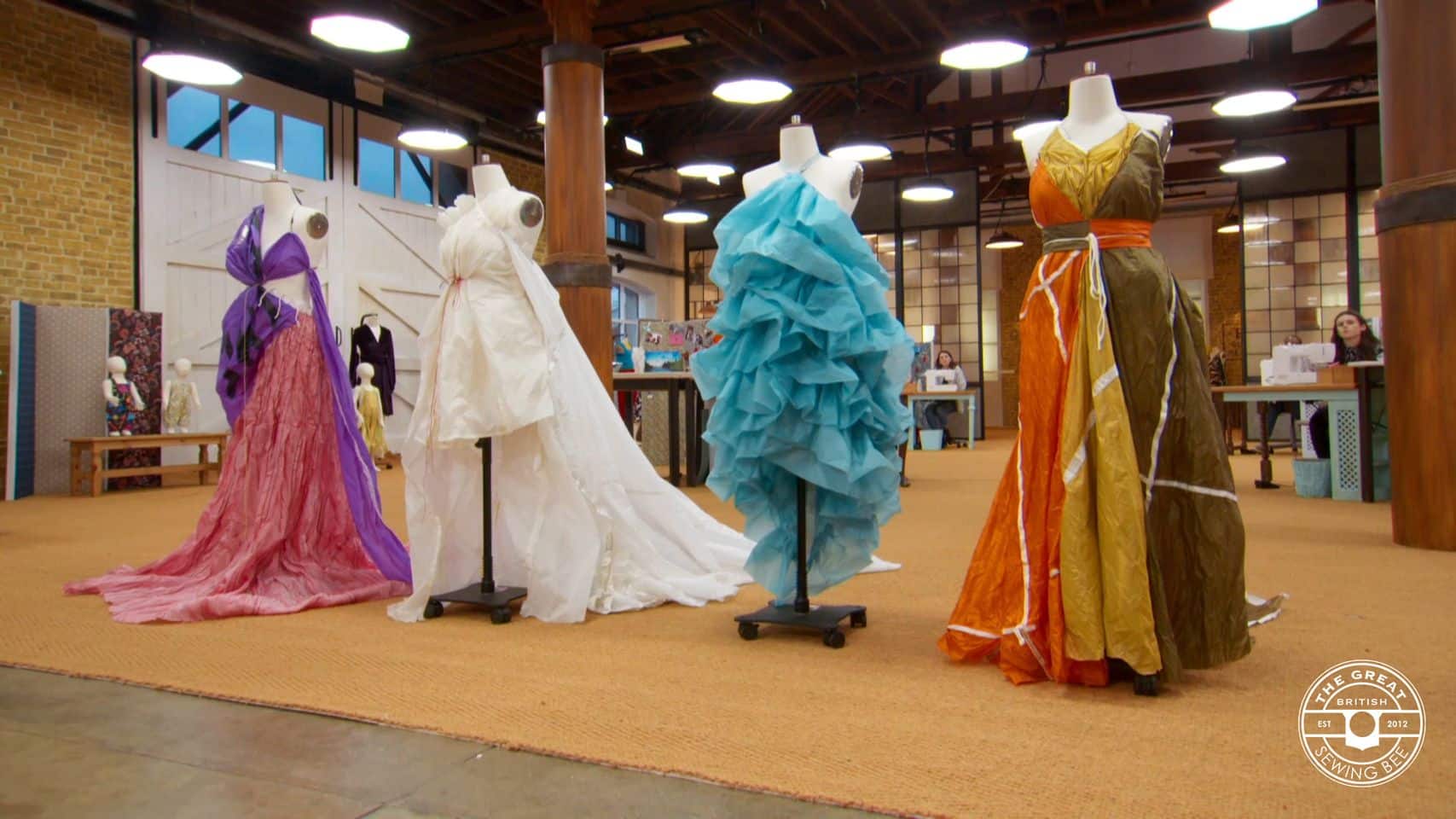 For the Made to Measure Challenge the contestants were asked to create an outfit inspired by Christian Dior’s “New Look”. This style was a reaction against the austerity of wartime, and brought glamour and luxury back to fashion. If you would like to learn more about Christian Dior and the “New Look” there is an interesting article HERE.

The judges explained that they didn’t want just a facsimile of of the “New Look”, they wanted the contestants to update the style and give it a modern twist.

Raph certainly did this by using very modern fabrics in his ‘space age’ design! His outfit featured a sheer blouse made from ripstop nylon and a scuba overskirt with a spacer mesh underskirt beneath. Patrick thought it was perfectly ‘New Look’ and Esme liked his use of black and white. However the judges did notice a little pull on the sleeves.

Rebeca was the only one to use a print fabric in her garment. She made a dress with a floral skirt, fitted bodice, peplum and used the floral print in the facings on the bodice. Esme thought the peplum and sleeves gave it a 1940s vibe. However, the buttons had been sewn in the wrong place on the front of the bodice which detracted from the overall finish. In addition, Patrick didn’t like the floral print facing on the bodice.

Farie had drafted her own pattern. Her dress was colour-blocked with bright red and lipstick pink and featured a high mandarin collar and a draped sash. However the fabric she chose was flimsier than she had hoped and showed every single pucker. She also had a fitting problem at the end and had to take it apart to fit the model meaning the pleat at the back was unfinished. The judges also noticed a couple of hems were not finished also. Although Patrick thought the colours were good he felt it didn’t really hit the brief.

Serena created a tailored two piece with a red peplum top over black trousers. Although she had had a problem with the fitting of the trousers she had managed to change it successfully. Esme thought it looked great and liked the big curved sleeves the bottom of which lined up with the bottom of peplum. Patrick felt she had “hit the nail on the head precisely” and created the absolutely perfect embodiment of Dior’s “New Look”. Not surprisingly she won ‘Garment of the Week’ which was a first for her! 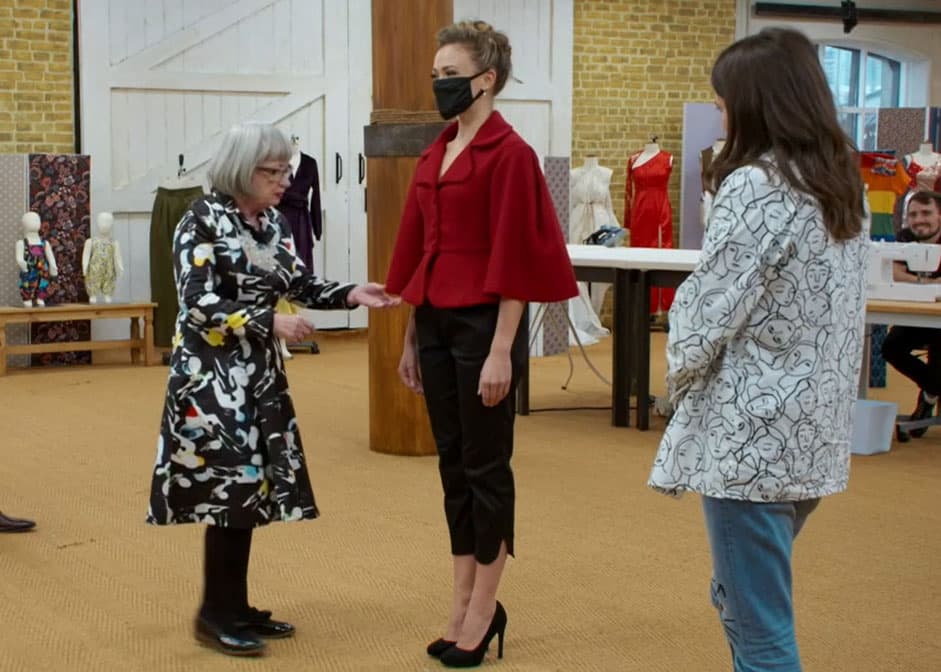 Sadly it was Farie who went home, having struggled to finish her garments many times over the last few weeks.

If you would like to sew a 1940s style dress then we recommend the Sew Over It pattern below: 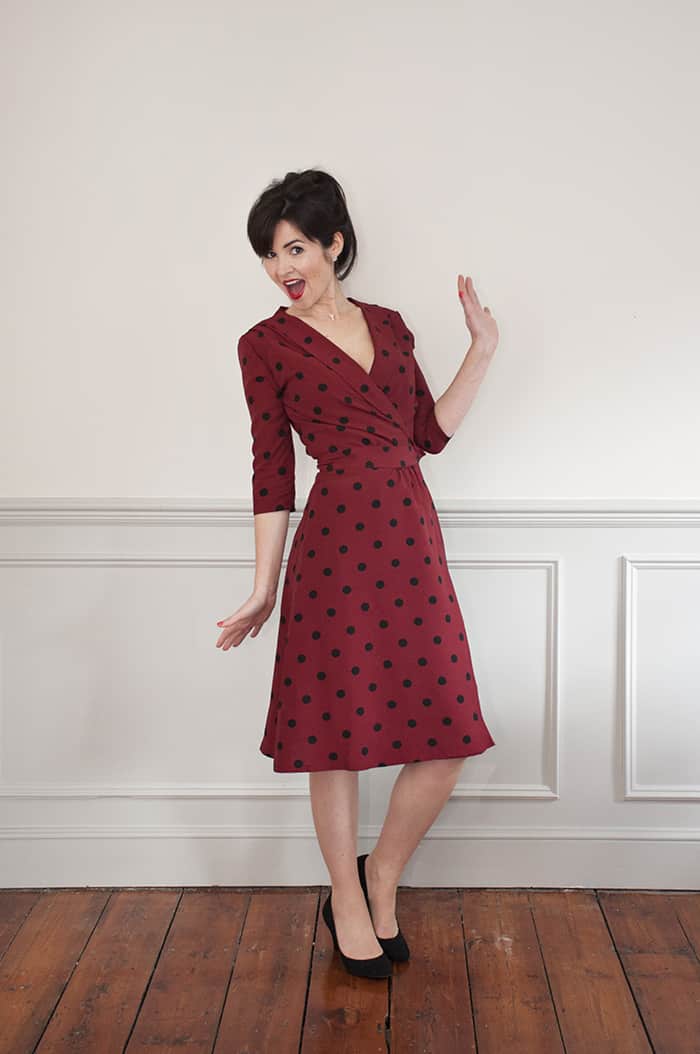 If you liked the distinctive print on Serena’s shirt, we have this fabric in stock.  There is only a little left in the navy version, but we have plenty of the ochre. 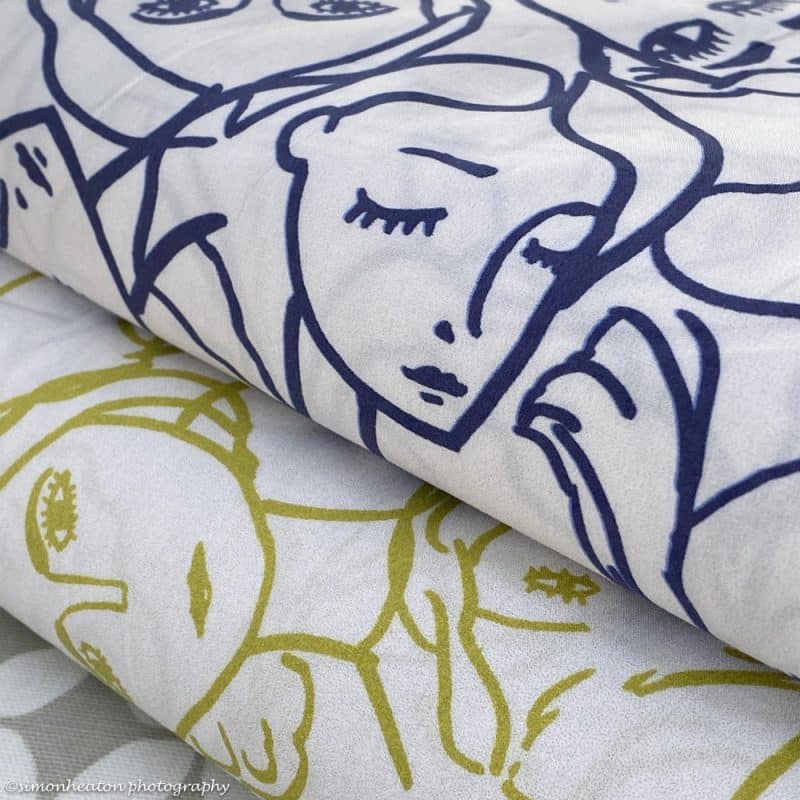 Suitable patterns would be: 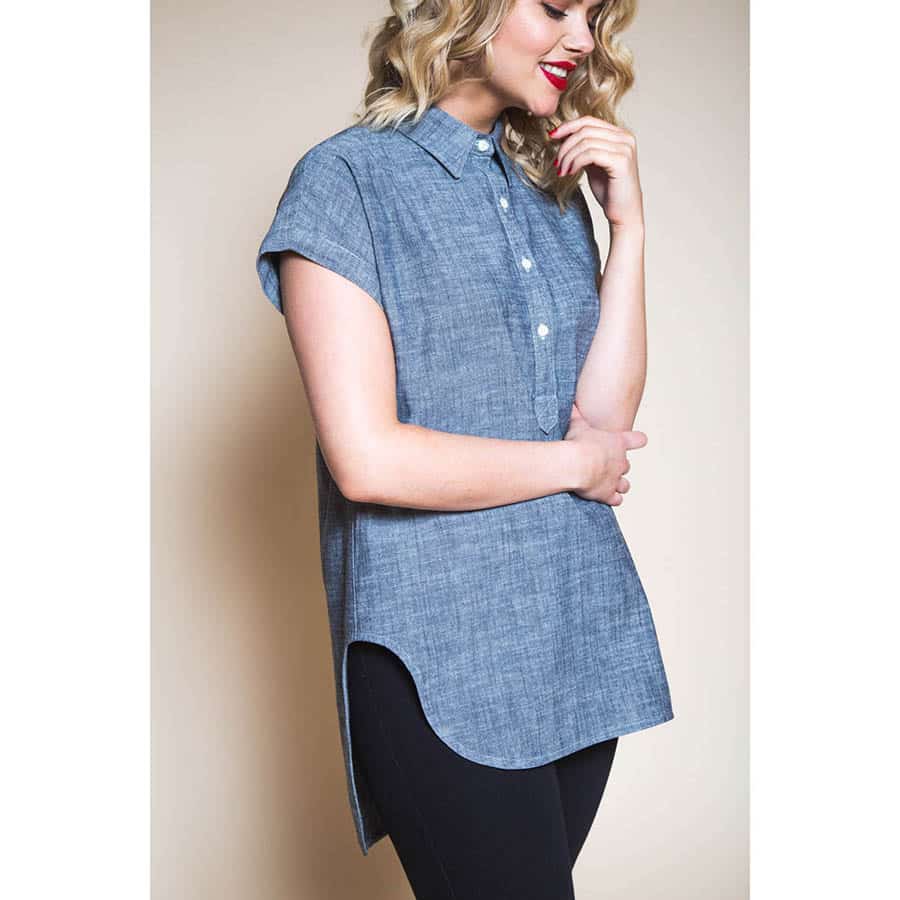 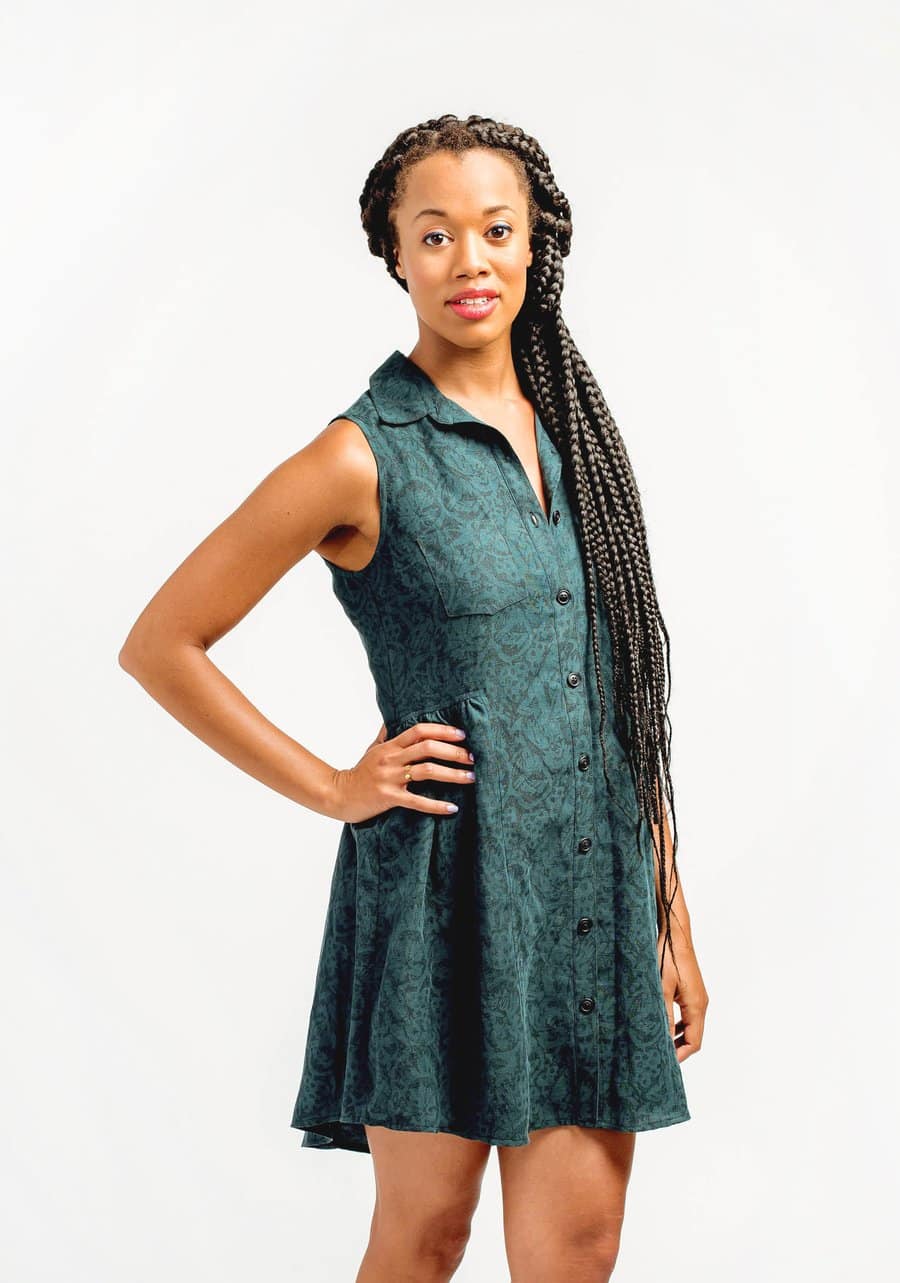 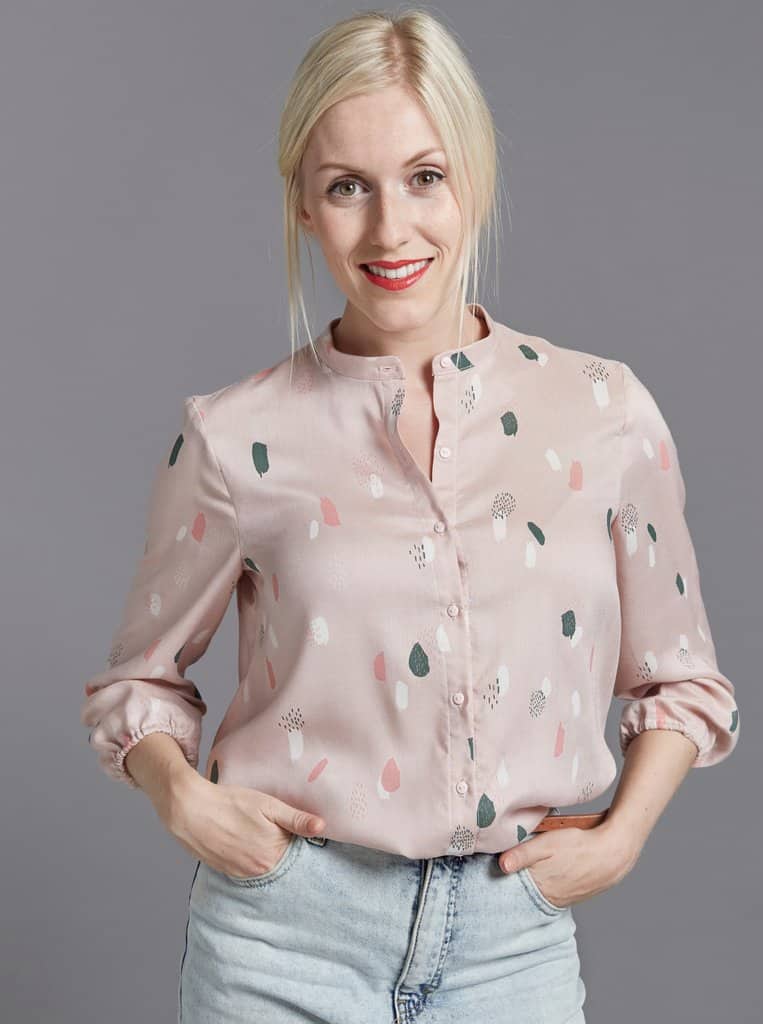 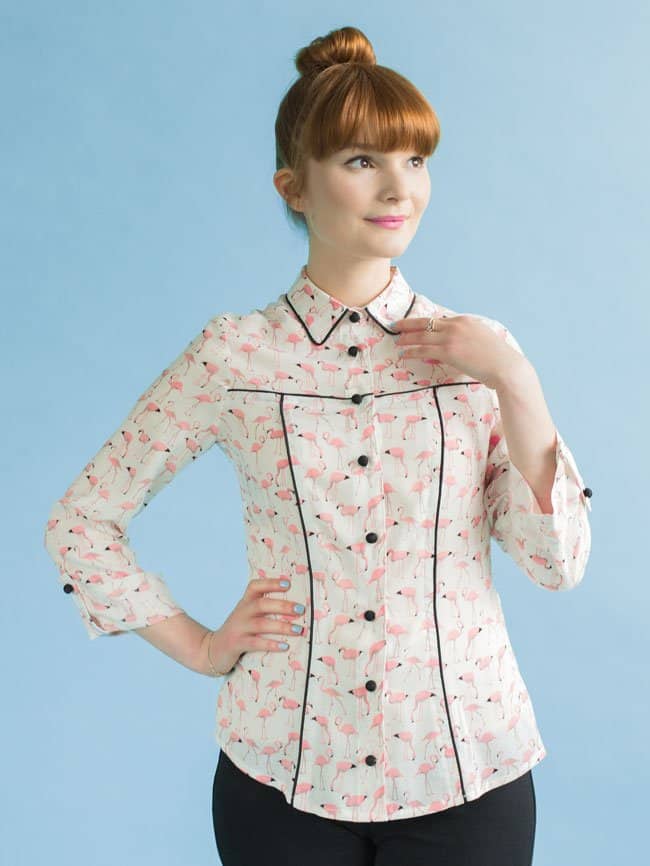 Tilly and the Buttons – Rosa Shirt and Dress Sewing Pattern