What an exciting final this was! It was the youngest final ever with the three finalists being:

Raph, a 34 year old textile artist from London. He was the least experienced of the finalists, having only really learned to sew properly during lockdown. However, he has consistently shown his design flair throughout the series. You can follow him on Instagram @raph_sew_and_so

Rebecca, a 23 year old customer assistant from Scunthorpe. She has been sewing from the age of four and studied textiles at A level. Her confidence and creativity has developed throughout the series. You can follow her on Instagram @rebeccamaydesigns

Serena, a 21 year old medical student from Edinburgh. She taught herself to sew from watching YouTube videos whilst in her teens. Serena has been consistently praised by the judges for her impeccable sewing skills. You can follow her on Instagram @serenasews_

This week the theme was ‘Celebrations’ and so for the final Pattern Challenge the contestants were asked to make a bridesmaid dress for a little girl. This featured a bagged out sash, crin sewn into the hem for volume and a bound buttonhole. The judges felt the bound buttonhole in particular would be difficult to sew on such a small garment.

There is a tutorial on making bound buttonholes HERE

Both Raph and Serena choose silk for their dresses, which neither had sewn with before. Silk can be difficult to sew as it is slippery and frays easily. This was particularly a problem when making the bound buttonholes. In contrast, Rebecca choose satin which she had sewn before.

The skirt lining was meant to be added separately by ‘stitching in the ditch’. (This means stitching right in a seam line in order to create an invisible line of stitching.) Serena misread the instructions and didn’t ‘stitch in the ditch’. She spotted her mistake, however, and painstakingly unpicked it and re-did it correctly. Raph, on the other hand, omitted the ‘stitch in the ditch’ to save time!

Raph was third in this challenge. The judges noticed that he hadn’t attached the skirt lining as directed and the resulting seam was messy. His bound buttonhole wasn’t neat either because the silk had frayed. Rebecca was second – her bound buttonhole not very neat and the sash was a little wobbly. Serena won the challenge. Esme thought her dress looked great and liked the contrasting floral lining. The judges thought the whole garment was incredibly neat, apart from the buttonhole which was a little messy.

Next up was the Transformation Challenge. The contestants were provided with a selection of household items such as beaded curtains, sequinned cushion covers etc. They were asked to use them to make a festival outfit. Esme explained that the judges wanted to see something amazing and flamboyant.

Raph won this challenge. His outfit consisted of fish-scale print cycling shorts with matching headband, co-ordinating top and a multi-coloured crochet bag! The headband and top were trimmed with sections from a multi-coloured sparkly fly screen! Patrick said it had loads of impact and Esme said it was fabulous. The judges felt that any festival-goer was guaranteed to have a good time in it.

Serena was second. She created trousers from a silvery curtain plus a top made from a multi-coloured sequined cushion cover. Rebecca came third – her dress was rather muted in comparison to the other two contestants. The judges thought it was chic and understated but could have been a little more fun.

Then it was time for the climax of the final – the Made to Measure Challenge. The contestants were asked to make an off-the-shoulder evening gown fit for a red carpet. Esme said she wanted something that would “knock her socks off”.

For the final the contestants were allowed to have their own friends and family as models. To comply with Covid regulations they had to self-isolate before coming on the show. Serena had an emotional moment when she was re-united with her brother’s girlfriend with whom she lived during lockdown. The other contestants from the show were able to watch via Zoom, as were the finalists’ family and partners.

Rebecca chose to make a fitted floor length dress in floral scuba which featured a godet panel train. Patrick thought it had impact and and the overall shape of it felt ‘red carpet’. Esme liked the fit and thought it a bit ‘Carmen Miranda’.

Serena based her dress on the style of ‘Killing Eve’s’ iconic character Villanelle. It was sewn from acid yellow tulle and had a ruffle neck line and used sixteen metres of tulle in the skirt! Patrick loved it and said it looked deceptively simple. He thought the bodice was neatly constructed, the gathering on the skirt was exceptional and overall it had a professional-looking finish. Esme did say, however, she would have liked more fullness in the skirt.

Raph’s dress was inspired by Kate Bush and ‘Wuthering Heights’ and was a corsetted Gothic gown in metallic red lame with pleated drapes. The back of the bodice was laced which the judges pointed out made getting the right fit easier. However, Raph struggled for time and did leave some hems raw. Patrick thought it was a clever and original design and loved the dramatic pleating and bows.

After much deliberation from the judges, Serena was announced to be the overall winner of the Great British Sewing Bee. Esme said that Serena’s sewing was so good it was as if fairy dust had been thrown over the garment and it looked like it hadn’t been touched by the human hand! Quite an accolade!  Serena was rather over-whelmed by her win and said that it felt like a dream.

Hopefully you have been inspired by the show to start some sewing projects of your own. Why not browse our Newest Arrivals page for the latest fabrics to come in.  Here are a few of our favourites: 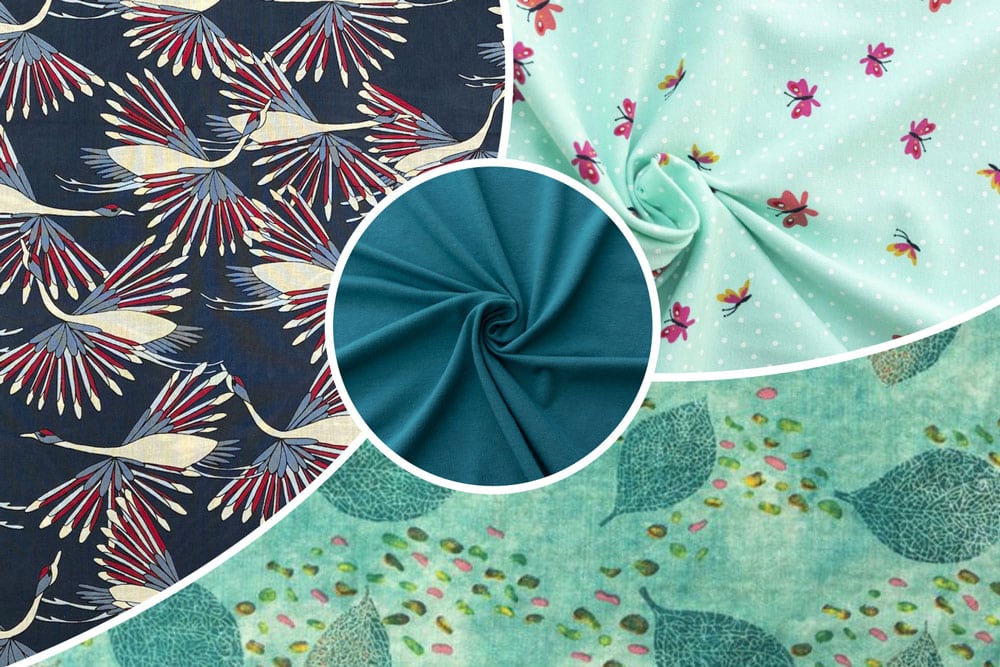 We also have a comprehensive range of sewing patterns from independent designers – you can search our patterns by ‘type’ and by ‘designer’.