The theme of this week’s Great British Sewing Bee was technical fabrics – some of the fabrics used included swimwear fabric, scuba, waterproofed tent fabric, shell-suit fabric etc.  Now this is not something that Dragonfly Fabrics specialise in, but we still wanted to give you a special offer this week so …

Our SPECIAL OFFER this week is 10% off our lovely range of our PONTE ROMA (including our very popular Cable Knit) with the code SEWINGBEE10 – you can browse the range HERE.  The Cable Knit is available in some beautiful new shades such as Teal and Fuchsia, plus we have many shades of plain Ponte Roma and we also stock some attractive spotted Punto di Milano.  There is also FREE POSTAGE on all orders over £30. 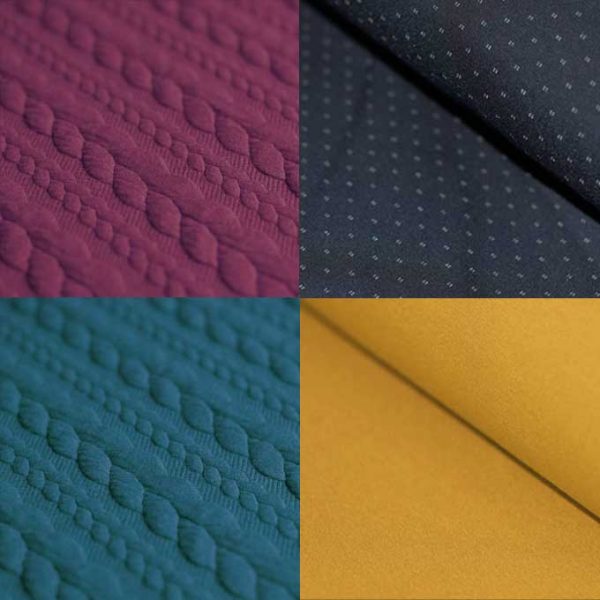 This week, the Pattern Challenge featured a panelled swimsuit with cross-over rouleau shoulder straps and a peek-a-boo bow front. The outer layer of the swimsuit was made from lycra fabric and inside it was lined with powermesh. Most contestants struggled with sewing the lycra to the powermesh as these two fabrics had different amounts of stretch and kept moving about as the layers went through the sewing machine.

Another difficulty was that with so many pattern pieces contestants found it hard to visualise how it all fitted together, with several of them sewing pieces upside down, missing out bits of powermesh etc. Another challenge was that elastic had to be inserted into the seams at the neck and legs using a coverstitch machine, which some of the contestants weren’t familiar with. And then they had to construct the rouleau straps and sew them securely to the swimsuit, which caused problems for some.

It was a very close contest for first place. Janet made a striking leopard print costume with contrasting plain side panels, and the whole garment was beautifully sewn. However, Juliet just pipped her to first place with an immaculate swimsuit made from a metallic-effect fabric with plain side panels. Sadly, Alexei came last as his costume was nowhere near finished.

We also learnt some interesting facts about the development of swimwear:

The Transformation Challenge this week involved recycling waterproof tent fabric into a dog coat. Patrick’s adorable dachshund Winston was brought in to demonstrate what the final garment should look like. Patrick pointed out that thousands of tents are discarded at festivals each year and this was a good way to recycle the fabric. Being waterproof and ripstop the fabric is excellent for dog coats. However, being stiff and unwielding the fabric was not the easiest to sew with, as contestants found to their peril!

Jen won this challenge with a smart camouflage design which incorporated panniers for dog poo pags! Riccardo came last – his dog suit featured carrying handles which he said was for use for when the dog got tired, but unfortunately the poor dog mannequin nearly tipped onto its head when lifted up!

If you are inspired to make a dog coat you could try this free pattern for a small dog or this pattern which incorporates pockets which you could use for dog poo bags, like in Jen’s design.

The Made To Measure challenge involved making a luxury tracksuit for a male model, which had to be made with a synthetic fabric. This proved tricky for most of the contestants with one nicknaming the challenge ‘death by tracksuit’!

TOP TIP from Leah was to label all her pattern pieces – this was because the fabric didn’t have an obvious right and wrong side which made it easy to sew pattern pieces the wrong way round.

Jen used scuba for her minimalist tracksuit which had a single red stripe down the back and had the legs ‘sculptured’ at the bottom to create a rumpled effect. Patrick was concerned that the fabric choice might result in the garment looking more like a wetsuit than a tracksuit, but his fears were unfounded as the finished garment ended up winning ‘Garment of the Week’. 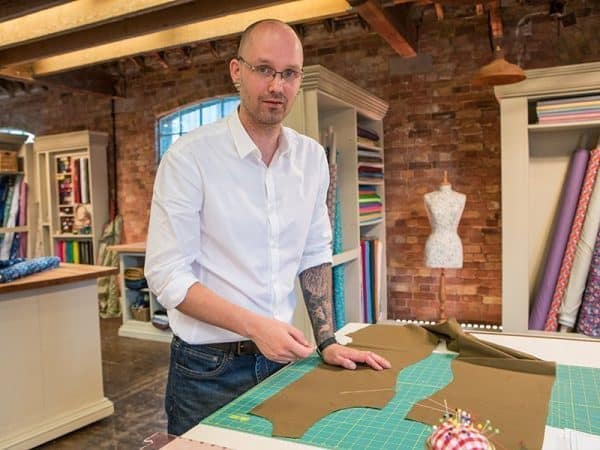 Alexei had hoped to redeem himself in this phase, as he did last week, but unfortunately he ended up sewing some of his panels the wrong way round, and Esme labelled his efforts ‘a botch’. Unsurprisingly, he was sent home as he had struggled in all three challenges.  His leaving speech was very touching and left many with a tear in their eye – it was certainly a great achievement for him to get so far in the contest when the right side of his body was so weakened by Multiple Sclerosis.

If you are inspired to make a tracksuit but want a fabric that is softer and more natural than the technical fabrics used in the programme, why not look at our gorgeous French Terry, which you can view HERE. It comes in three beautiful colours:

And if you admired Janet’s top in this episode, then you will love our Art Gallery Jersey Knit Fabric – Paparounes Spices; 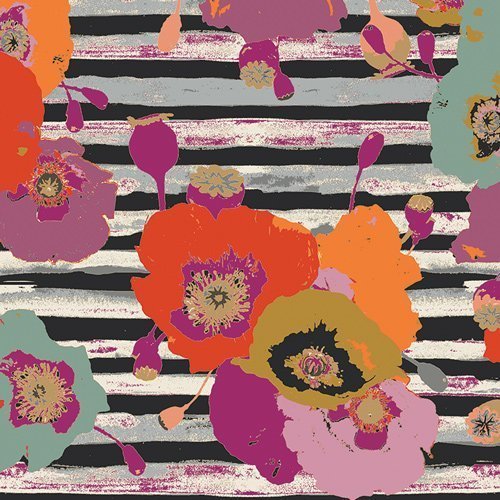 We are now left with six contestants – Mercedes, Juliet, Leah, Riccardo, Jen and Janet – who will go through to next week’s episode, where they will be fighting for a place in the quarter finals.  And we understand the theme next week will be ‘recycled fabrics’!

FacebookTwitterLinkedinRedditTumblrGoogle+PinterestVkEmail
We use cookies to give you the best online experience and by clicking here or staying on our site you agree to this - enjoy ! Read our privacy policy