This week the Bee was all about typical British and Irish fabrics, one of which was linen.  Patrick explained that although linen was an ancient fabric it was getting a lot of attention these days, because it is such a sustainable fabric.  Linen is produced from the flax plant which can be grown without pesticides, fertilizer or irrigation.  Additionally, the flax seeds can be pressed to make linseed oil, or used in human or animal food. Therefore no part of the plant goes to waste.

So this week our GBSB Special Offer is 10% off our Linens and Linen Blends if you use the code SEWINGBEE10.  There is also free postage if your order is over £30.  You can browse the range HERE.  Our Viscose/Linen Blends are just in and are perfect for tops, blouses and dresses.  They come in a range of lovely colours too.  We also have some Linen/Cotton Blends and our lovely soft Bio Linen.  Clockwise from top left below are: Herringbone Linen/Cotton Twill, Green Viscose/Linen, Petrol Bio Linen and Red Viscose/Linen. 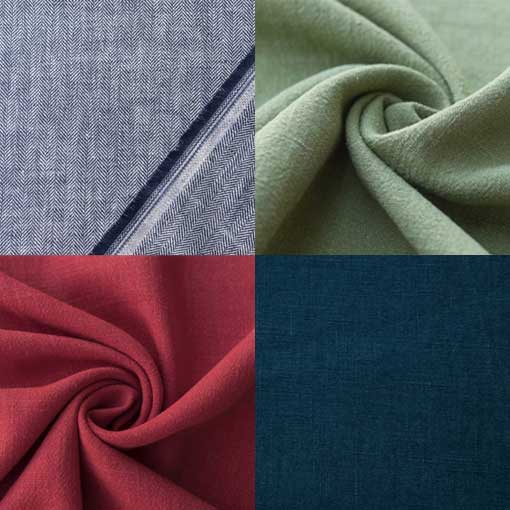 Any of these fabrics would be super for the Closet Case Files Charlie Caftan or the Merchant & Mills GYO Top & Dress: 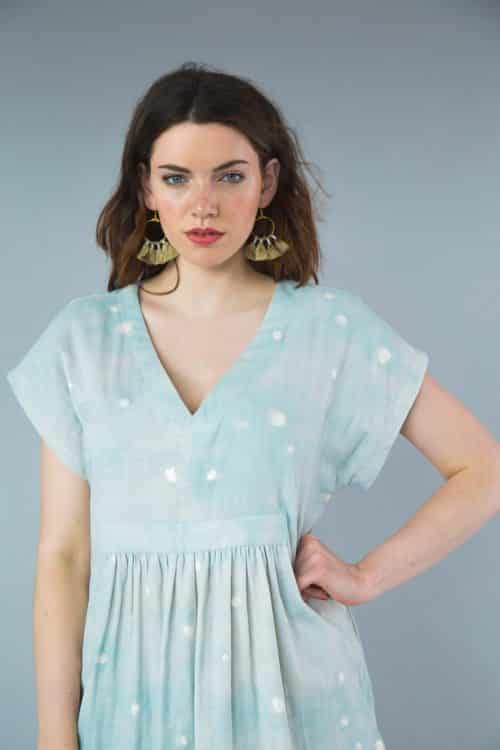 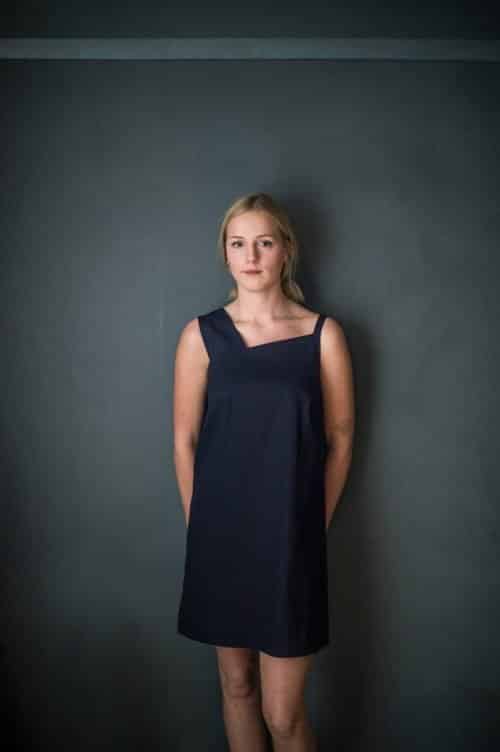 In the Pattern Challenge the contestants were asked to make a man’s jacket from Irish linen. Most of the contestants found the process of sewing the jacket quite challenging.  The judges were looking for the pockets to be symmetrical and line up across the front of the jacket and be sewn on with immaculate top-stitching.  The jacket sleeves were made of two pieces of fabric. As linen looks similar on both sides, the contestants had to be careful to sew both sides of the sleeve the right way round.

Both Riccardo and Janet sewed one of their sleeves back to front, with Riccardo coming third in this challenge and Janet fourth.  Leah struggled with the collar which ended up lumpy and bumpy  and the pitch of her sleeves was totally wrong, so the judges placed her last.  Patrick described Juliet’s jacket as being “a little bit agricultural in places” but it was a wearable garment and took second place.  Jen produced a near perfect jacket and her collar and lapel sat perfectly and were only a millimetre out. Patrick described it as a fantastic piece of sewing and, unsurprisingly Jen won this challenge.

If you would like to learn how to sew lapels well, then there is an article on THIS LINK. 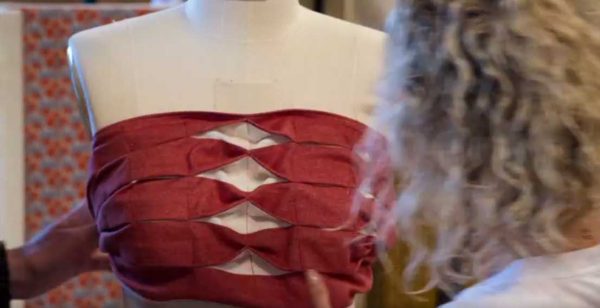 For the Transformation Challenge the contestants had to take a striped deck-chair and a striped parasol made from cotton ticking and turn it into a fantastic outfit – the judges were particularly looking for contestants to manipulate and play with the stripes.

All the contestants made some imaginative and creative outfits.  Janet made a beach dress with a ra-ra skirt. and used the striped fabric to make a star on the front. However, the fit let it down and one of the side panels was not quite right, so she came last in the challenge.  Riccardo made a Victorian bathing suit with gathered bloomers which gained him third place.  Juliet made a sun dress with a pleated front but her failure to remove her pins saw her relegated to fourth place.

Jen pleated her deck chair fabric to make a skirt where the red stripes were on top with the white fabric at the back of the pleat, which was very effective and paired it with a chevron striped top which saw her get second place.  Leah used a similar approach to make a fantastic pleated boob tube with a striking origami effect, which was teamed with a billowing skirt.  This won the challenge for her.

If you would like to learn more about sewing with stripes, then there is a useful article HERE.

If you are looking for a pattern that allows you to play around with stripes, then the Wattle Skirt from Megan Nielsen would be perfect as you can see from the photo.  This would also be lovely in any of our Linens or Linen Blends above. 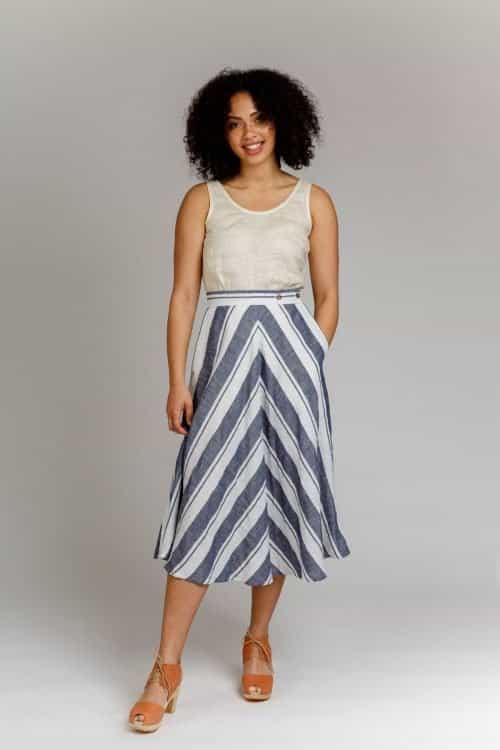 For the Made To Measure challenge the contestants were asked to make a coat out of British wool.

Janet’s coat was made from deep orange wool and featured appliqued panels depicting London landmarks.  She chose not to line her coat, instead opting for a time-consuming Hong Kong finish on the seams. Sadly, this took up so much time she was unable to finish her sleeves or sew her buttons on.

Juliet choose a simple, classic mid length style which she made in camel wool.  The judges commented that her collar and lapel were very precise but she needed a bigger shoulder pad. They also remarked that the balance of the coat was “miles off” as the bottom hem ran up at the front. They concluded she wasn’t as comfortable sewing tailored clothes as she was with dresses.

Leah also opted for camel wool, but chose a 1960s swing coat pattern with a contrasting Peter Pan collar in bright red with bright red buttons.  However, her collar turned out very thick and lumpy.

Jen also based her design on a 1960s swing coat pattern.  Her coat was mainly in a dark pink Harris tweed, but had contrasting grey wool in the side panels, which was very effective. However, the judges felt the raglan sleeves didn’t suit her model who had very square shoulders.

Riccardo chose a pattern from the 1970s which he made in maroon wool with contrasting Harris tweed across the shoulders and in the pleat in the back. The judges thought this was a “really impactful” coat that was well-sewn and awarded it “Garment of the Week”.

The judges then had a very hard decision to make.  Rather controversially, they opted to send Janet home – the remaining contestants are sure to miss her wealth of knowledge and expertise, as she was always happy to help them out when they struggled with their sewing.

If you are inspired to sew a coat after this week’s episode, we would suggest the new Chloe Coat by Sew Over It.  This is a beautifully classic coat with a 1960’s vibe. 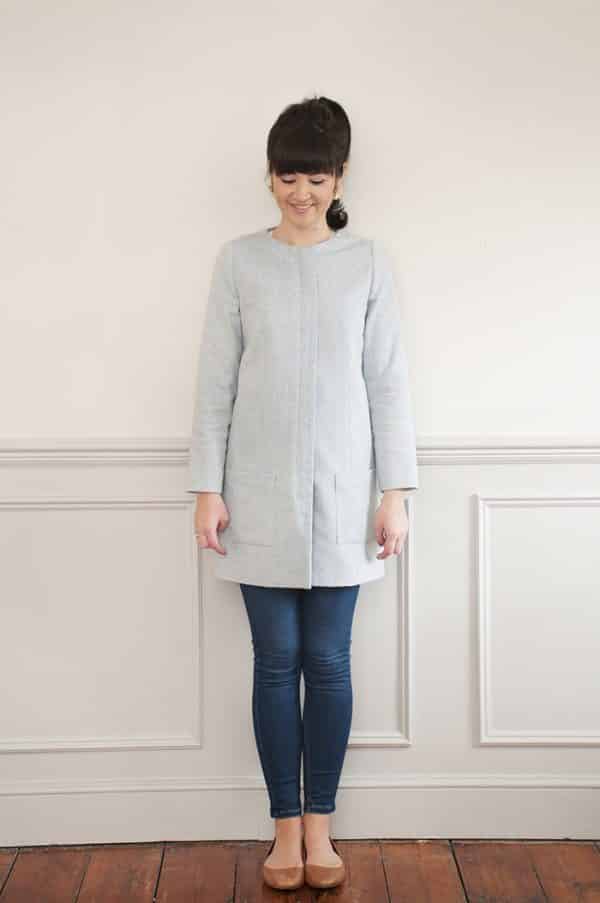 Sew Over It Chloe Coat

Or how about the Clare Coat from Closet Case Files – this features raglan sleeves and an unstructured A-line silhouette. Option A ends at mid thigh and has an exposed asymmetrical zipper and welt pockets whilst Option B is double-breasted and ends at the hip hip with inseam pockets. 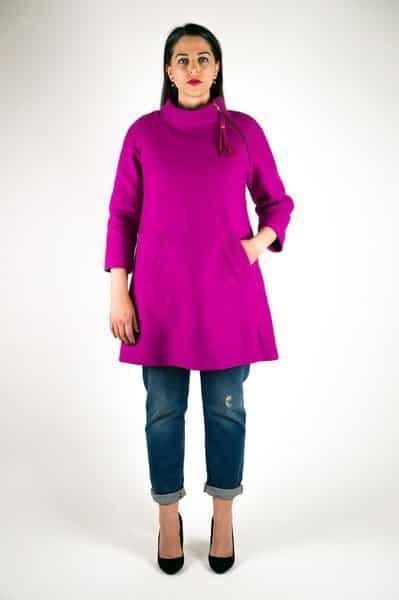 Both of these patterns would be fantastic in our lovely Boiled Wool – we have a great choice of colours, just a few are shown below: 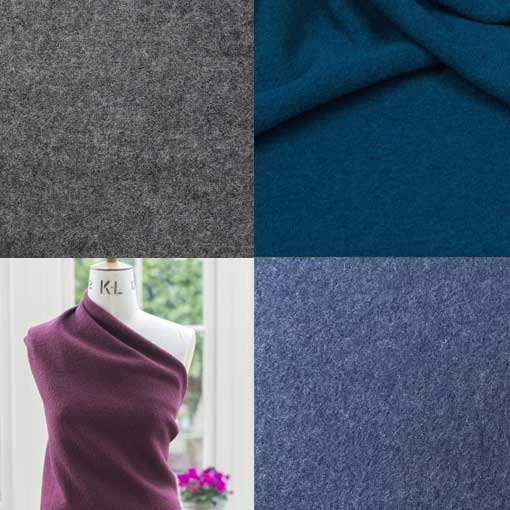 If you would like to learn a bit more about some of the techniques used in this episode of the Great British Sewing Bee, HERE is an article explaining how to bag a lining.  Then we have both an ARTICLE and a VIDEO TUTORIAL on the Hong Kong finish that Janet used in her coat.

We are looking forward to the next episode with great excitement as it will be the semi-final!  Apparently, the four remaining contestants will go global, taking on garments and techniques from around the world.

FacebookTwitterLinkedInRedditTumblrPinterestVkXingEmail
We use cookies to give you the best online experience and by clicking here or staying on our site you agree to this - enjoy ! Read our privacy policy